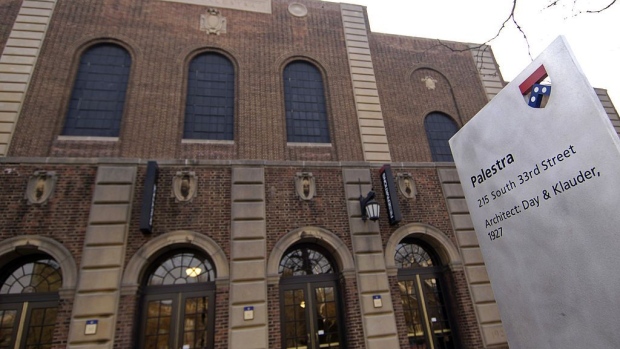 UNITED STATES - MARCH 15: The Palestra, home of the Penn Basketball men's team, on the University of Pennsylvania campus in Philadelphia, Pennsylvania, Thursday, March 15, 2007. Penn is the only school in the 65-team NCAA men's national basketball tournament field that doesn't offer financial assistance to athletes, adhering to the academics-first credo of the Ivy League, where good grades are prized over championships. (Photo by Mike Mergen/Bloomberg via Getty Images) , Photographer: Bloomberg/Bloomberg

(Bloomberg Opinion) -- What are university endowments for, anyway? This debate has become more intense with the arrival of Covid-19 and the accompanying economic devastation. There is now a clear division between two visions of a university: Is it a community devoted to the well-being of its members, or an elitist institution dedicated to learning above all else?

Some think that endowments are for bad times when colleges and universities need to dip into their savings to safeguard the well-being of their communities. In that view, an endowment might be used to compensate students for hardships suffered and instruction foregone.

A petition to the University of Pennsylvania protests student evictions from dorms and asks that all university students be provided with housing security. It also demands that the wages of hourly workers, such as janitors and those in food service, be maintained. (Similar petitions are circulating at many universities.) In case you are wondering, as of last June the University of Pennsylvania’s endowment was estimated to be $14.7 billion.

So far the university has not announced any plan to satisfy the demands of the petitioners, nor has it announced tuition refunds, nor refunds for room and board fees.

Elsewhere, the University of Chicago is paying its food-service workers. Harvard is offering 30 days’ pay for its dining service employees, but nothing for the subcontracted workers. As of last June, the Harvard endowment was valued at $40.9 billion.

If you spend time at these universities, as I have, you will notice that the overwhelming majority of the political rhetoric of both the faculty and the students is supportive of egalitarianism and is critical of accumulated wealth. Yet the actual behavior of these universities does not accord with that rhetoric.

That contradiction has now become impossible to sustain.

I support a radical vision of the university as an institution devoted to learning and innovation above all. If a school is successful and fortunate enough to have a significant endowment, I am happy to see that school invest it at (one hopes) high rates of return. Even putting the mission of the school aside, those investments are good for overall economic growth, which in turn enriches the broader citizenry. The accumulated wealth also means that those universities will endure and reflect some of our civilization’s highest ideals.

Only a few institutions in the world have been in continuous existence since medieval times, and most of those are universities, such as Oxford, Cambridge and Bologna. (The Icelandic Parliament also has a long heritage.) For the most part, those institutions have been geared toward investing and accumulating wealth and social capital, not spending it down, and the world is much better off because of that.(1)

The real contributions of Harvard, MIT and Stanford to the world are not the food-service workers they hire. They are the ideas and innovations produced by its researchers, plus the talented students they educate. Less successful universities also contribute those same broader benefits, even if at a lower scale of effectiveness. Furthermore, the top schools rely on those lesser institutions, if only as future employers of their graduate students and thus maintaining a liquid market in scientific endeavors.

Harvard, Stanford, and MIT stay true to their missions not by regularly asking whether they ought to redistribute their endowments to starving people around the world. And their food service workers are not more needy because of Covid-19 than other possible recipients of the funds — the dengue victims in Central America, say.

I am not saying these universities shouldn’t do something charitable for their workers. They should, if only to maintain amicable relations within the university community itself. I am saying that their moral obligation to extend charity to those workers is not very strong. Had such charity been prioritized in the past, the U.S. never would have developed and maintained top universities. Part of America’s greatness as a nation, and as an innovator, is its unwillingness to ask anew every day whether its elite accumulations of wealth should be torn down and rededicated to everyday purposes of a supposedly greater benevolence.

Many of the technologies, innovations and companies crucial to the fight against Covid-19 will come from colleges and universities. Those schools need a single-minded dedication to their missions of learning, research and innovation — no matter how urgent or extreme the demands of the day. And that means saying no to a lot of those demands, in the process acknowledging the elitist ethos these schools have long embodied. To say that these schools don’t need that much money is to underestimate the focus needed to maintain that quality.

(1) My own employer, George Mason University, has a relatively modest endowment of $113 million as of June 2019. I am not privy to the school’s plans with it.

Tyler Cowen is a Bloomberg Opinion columnist. He is a professor of economics at George Mason University and writes for the blog Marginal Revolution. His books include "Big Business: A Love Letter to an American Anti-Hero."