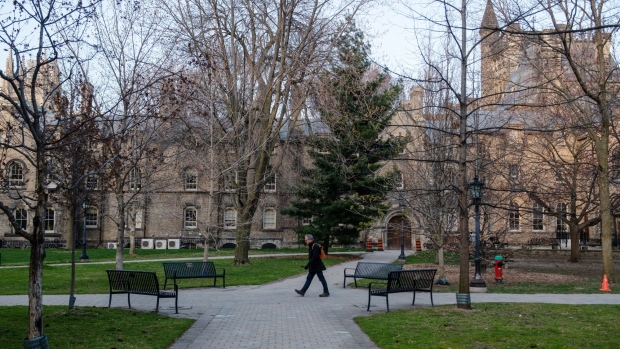 A pedestrian walks through the University of Toronto campus in Toronto, Ontario, Canada, on Tuesday, April 28, 2020. , Bloomberg

Canada’s largest university will divest from fossil fuel companies in its $4 billion (US$3.2 billion) endowment fund by the end of the decade and aim to get its portfolio to net zero greenhouse gas emissions by 2050.

“It is our belief that this will both accelerate the transition to a low-carbon economy and inspire other investors to do the same,” Meric Gertler, president of the University of Toronto, said Wednesday in a written statement. “We hope it will also encourage government actors at home and abroad to intensify their efforts to tackle the challenge of climate change.”

As part of that pledge, the university’s investment arm has joined the UN-Convened Net-Zero Asset Owner Alliance, a global body created to help institutional investors transition to net zero emissions, the school said in a news release.

Universities around the world have begun taking action to align their investments with the urgent need to take action on climate change. Last month, Harvard University said it will stop investing in fossil fuels, pivoting its US$42 billion endowment to support the green economy. Other schools including Cambridge University have made similar pledges.

The University of Toronto will unwind all direct investments in fossil fuel companies in the next 12 months and end all indirect exposure -- “typically held through pooled and commingled investment vehicles” -- no later than 2030, it said. Fossil fuel investments currently make up about 1.62 per cent of the portfolio, a representative for the university said.

It’s also reallocating resources. By 2025, 10 per cent of the endowment portfolio, representing an initial commitment of US$400 million, will be directed to sustainable and low-carbon investment strategies. Currently less than 2 per cent of its funds are in those types of investments, the representative said.

“As owners of financial assets such as endowments and pension funds, universities have both an economic imperative and a moral obligation to manage these assets in ways that encourage carbon emission-reducing behavior in the wider economy,” Gertler said.