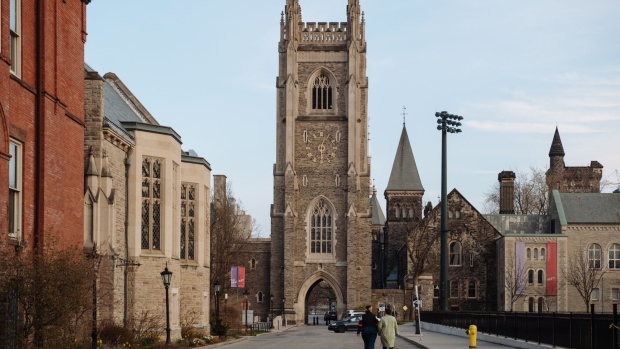 Pedestrians walk through the University of Toronto campus in Toronto, Ontario, Canada, on Tuesday, April 28, 2020. , Bloomberg

The University of Toronto is wagering the booming environmental, social and governance credit sector will outperform traditional game plans.

RP Investment Advisors LP raised $213 million (US$161 million) from University of Toronto Asset Management, the manager of the university’s pension, endowment and short-term working capital funds, at the beginning of this year. It will invest in the debt of companies that have committed to reducing their carbon footprint, according to David Matheson, RPIA’s head of portfolio management.

“The mandate requires that we are investing in companies that, on average, have lower emissions than the index, but the goal is to both encourage transparency and disclosure, as well as encourage companies to commit to reductions and to do so in a timely manner,” Matheson said in an interview.

RPIA, which now has $5.7 billion under management, will focus on largely investment-grade names. Under its global credit strategy, it can invest in a broad range of sectors including financial, energy, industrial and infrastructure companies. It’s staying away from tobacco companies, as well as cluster munitions manufacturers.

The firm is betting that using ESG as a tool in its asset allocation will lead to outperformance.

“The concept of actually embedding ESG analysis into your investments is about using the information in the marketplace to make better decisions,” Mike Quinn, the chief investment officer at RPIA, said in the same interview. “Certainly the firms that are leading on the ESG front are leading on many other factors, so by tilting your portfolio to have those factors more relevant, it can be an opportunity for outperformance.”

The strategy for the University of Toronto has returned 7.91 per cent this year through August, he said, compared to the FTSE Canada Corporate BBB Bond Index at 6.65 per cent.

The money manager for the school, founded in 1827 and Canada’s largest university by student population, had already committed to a reduction target for the carbon footprint of the pension and endowment portfolios on equity assets it owns. University of Toronto Asset Management, which has $9 billion under management, has now decided to extend this to its fixed-income portfolio, said Daren Smith, president and chief investment officer at the fund.

“We’re looking at many different ways that we can reduce the carbon emissions in the portfolio,” Smith said. “Obviously different sectors will have different emissions.”

Toronto-based RPIA is one of several money managers deepening their push into sustainable strategies. The investing world of ESG just broke through another barrier, as total green bond issuance topped US$1 trillion in the past week, joining ESG-focused funds that have a similar amount in assets under management.

In the past month alone, more than US$50 billion of green bonds were sold, including debuts in Germany by a trio of automakers including Volkswagen AG, and JPMorgan Chase & Co., the biggest U.S. bank by assets, according to data compiled by BloombergNEF. On Tuesday, Ontario raised $1.5 billion through its largest-ever sale of green bonds.