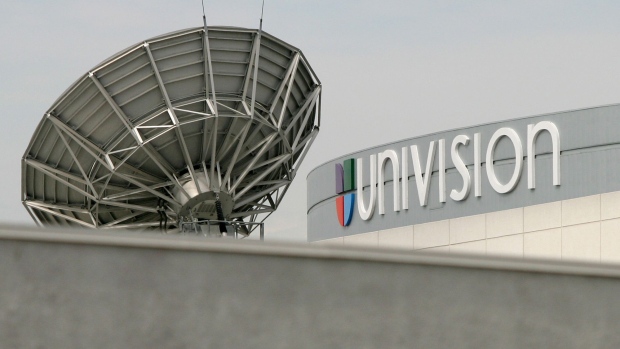 A satellite dish is positioned on the roof of Univision Communications Inc. in Los Angeles. , Photographer: Tim Rue/Bloomberg

(Bloomberg) -- Univision Communications Inc. fired one of Puerto Rico’s most prominent radio commentators after he used a racist term in an attempt to describe how Black people talk to one another.

The Spanish-language broadcaster said it conducted an investigation and decided to sever ties with Luis Davila Colon on Thursday.

“Earlier this week on WKAQ Radio in Puerto Rico, Luis Davila Colon used an offensive, despicable slur,” the company said in a statement. “We do not tolerate or accept any such vile language or attitudes in our workplace or on our air.”

Davila Colon said he was trying to explain to listeners of his afternoon show, “El Azote,” or “The Whip,” that Black people on the mainland sometimes refer to one another as the N-word and it’s not explicitly racist.

In a video posted on his social-media accounts, Davila Colon said his political enemies were using the scandal to force him off the air ahead of the Nov. 3 governor’s race. The radio personality is pro-statehood and has often clashed with San Juan Mayor Carmen Yulin Cruz, who is running in the race and is an advocate for a more autonomous Puerto Rico. Earlier this year, Colon was temporarily suspended for insulting Cruz on the air.

Univision owns and operates 65 television channels and 58 radio stations across the U.S. in predominantly Hispanic markets, including Puerto Rico.

In February, investment firms Searchlight Capital Partners and ForgeLight, agreed to buy a 64% ownership stake in Univision. Grupo Televisa SAB, which supplies Univision with Spanish-language programming, held onto a 36% stake.