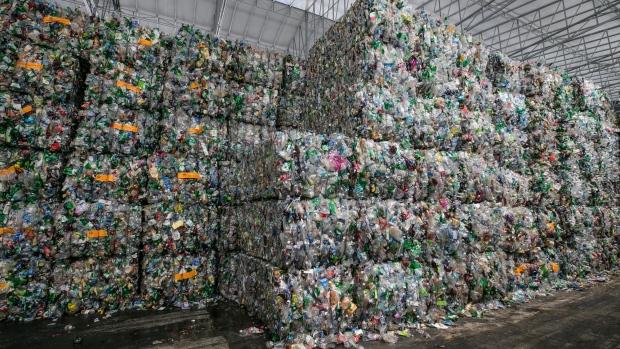 (Bloomberg) -- Plastic recycling is evolving. The next step will be more like reincarnation.

At least 60 chemical companies are racing to develop technology that can return trash to its original hydrocarbon ingredients, according to a report Tuesday. The process -- call it the unmaking of plastic -- creates clean, virgin resin that can be used for new products, avoiding the need to pump oil for endless fresh batches.

The stakes couldn’t be higher for an industry under attack for producing a ubiquitous material essential to modern life that’s grown notorious for choking the world’s oceans and killing its animals. Resin makers and consumer brands are trying to head off a global backlash that’s already eroding demand for their products.

“If they don’t play an active role in this, they’re going to see brands and customers de-select plastics,” said Ellen Martin, a vice president for Closed Loop Partners, an investment firm focused on creating a circular economy. “It’s a threat to their overall business.”

A $120 billion market opportunity for recycled materials awaits successful technologies, according to a Closed Loop report.

Old-fashioned recycling, sometimes called “chop and wash,” is a relatively crude, mechanical system that can’t handle most varieties of resin and can’t get rid of all the contaminants, resulting in dirty plastic with limited uses. So, yogurt tubs are sent to the landfill and milk jugs are made into plastic lumber.

Less than 10 percent of plastic in North America gets recycled, generating one pound of recycled plastic for every 15 pounds of demand, Closed Loop found in its study. That falls woefully short at a time when manufacturers like Coca-Cola Co. are committing to using more recycled plastic.

Pressure is rising on plastic makers to come up with new solutions.

“We won’t be able to get there unless we’re able to do something that goes beyond the traditional mechanical recycling systems we have today,” said Tim Dell, vice president of corporate innovation at Eastman Chemical Co.

Eastman is joining a parade of companies large and small aiming to develop ways to take old plastic, break it down into its chemical components and then use that to regenerate raw materials. Eastman last week announced it will begin a commercial-scale operation to reclaim mixed plastic waste that otherwise would end up in landfills, with a second plant targeting polyester waste to follow.

“We have completely broken down these plastic feedstocks to their original molecular building blocks,” Dell said. The output is “indistinguishable from what’s produced by fossil sources.”

Eastman’s initiatives join a diverse field of technologies that break down polymers using everything from microwaves, in the case of Ontario’s Pyrowave Inc., to enzymes, as pioneered at Carbios, a publicly traded French company, according to Closed Loop. Polystyvert Inc., a Montreal startup, uses an essential oil to dissolve polystyrene, the plastic used in yogurt cups and packaging foam, creating purified plastic pellets.

Chemical recycling could quadruple global plastics recycling rates to 50 percent by 2030, up from 12 percent now, according to a December report from consultant McKinsey & Co.

The shift could drive the bulk of future profits for plastic makers, but it won’t come cheap, McKinsey said.

McKinsey estimates as much as $20 billion a year will be needed to improve waste-recovery systems, about one-fifth of the chemical industry’s average capital spending. As awareness grows, major investors such as Blackrock Inc., Kleiner Perkins Caufield & Byers and the Royal Bank of Canada are already stepping up, said Closed Loop’s Martin.

“The challenge is we need to make sure there is a clear pathway for the technologies to grow in scale, otherwise we’ve missed an opportunity,” she said.