Macquarie Capital Canadian Market Strategist David Doyle thinks the debt load Canadians are carrying will crimp consumer spending and in turn weigh on domestic economic growth. In an interview on BNN, Doyle said house-poor Canadians will cause an unprecedented divergence in economic growth between the Canada and the United States.

“I would describe this as something that’s unprecedented: we’ve never seen Canada and the U.S. [become] so desynchronized,” he said. “[Canadians are] that much more stretched on a consumer basis, on a housing basis, relative to the U.S.: we think that puts our economies on very different tracks going forward.”

The prospect of disappointing economic growth in Canada is also compelling Doyle to warn Ottawa that it should brace for more budget pressure.

“Over time we should expect wider and wider deficits at the federal level in Canada. The outlook that we have for lower growth represents a big headwind to the revenue side of the budget equation. … As we move through this cycle, the low growth that we’re anticipating for Canada is going to put a lot of burden on the federal government.” 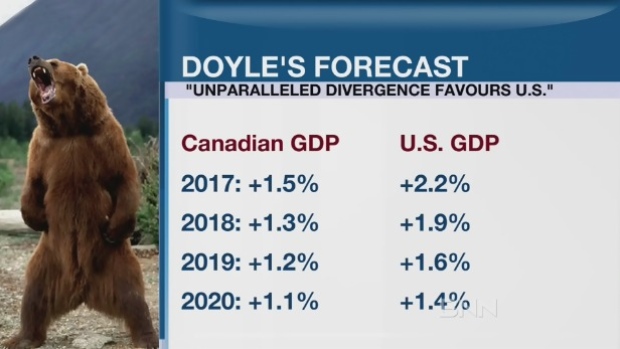 Doyle said investors should load up on stocks with exposure to the United States due to those expectations of muted domestic growth.

“The primary prong is that as a Canadian company selling abroad, you have access to markets that have stronger fundamentals than Canada’s economy, where you’re likely to see faster, more resilient growth, consumers that are on firmer footing. We think that gives you a source of revenue you don’t get by selling to the Canadian consumer,” he said.

Doyle said foreign exchange considerations are also key to his investing thesis, as a weak Canadian economy should also be a drag on the loonie, making foreign revenue relatively higher when repatriated.

Doyle highlighted investing opportunities in a slate of Canadian firms ranging from Celestica to Alimentation Couche-Tard, but said the greatest opportunity appears to lie in an oft-forgotten slice of the Canadian market.

“The technology sector in particular in Canada offers some opportunities on that front. It’s somewhere between 80-85 per cent of revenues for that sector, as a whole, come from abroad,” he said.