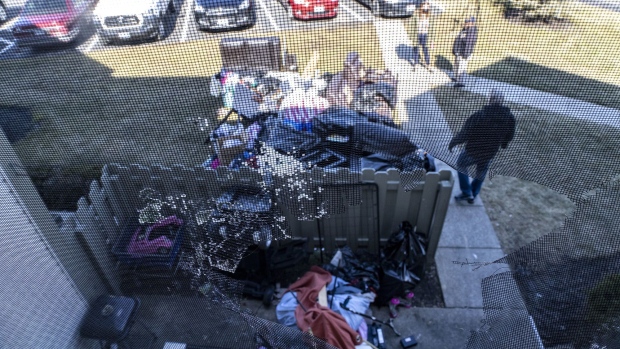 Items are removed from a home during an eviction in the unincorporated community of Galloway on March 3, 2021 west of Columbus, Ohio. , Photographer: Stephen Zenner/Getty Images

(Bloomberg) -- A federal ban on evictions is set to expire at the end of July, and this time it’s unlikely to be extended, putting millions of renters at risk.

The moratorium has been in place through much of the pandemic, but it’s part of a wave of emergency programs ending even as the Delta variant fuels rising Covid-19 cases in the U.S.

While some states, including California and New York, have their own eviction bans, the expiration of the Centers for Disease Control and Prevention’s moratorium has housing advocates worried about a surge in landlords forcing out tenants who have fallen behind on rent.

Congress has allocated nearly $47 billion in assistance but so far states and local jurisdictions have been slow to distribute the funds.

To understand what may happen next, Bloomberg talked to housing expert Ingrid Gould Ellen, a New York University professor who has studied federally funded emergency rental assistance programs during the pandemic.

We’ve been talking about an eviction crisis since the start of the pandemic, but it hasn’t happened yet. Do you think we’re poised to see one soon? Why or why not?

It hasn’t happened yet because of moratoriums, federal assistance and uncertainty among landlords about finding new tenants. But there are still a lot of renters behind on rent, and some of them are far behind on rent and at risk of losing their homes, especially if they’ve reached the end of their lease. The Census Pulse Survey suggests that 16% of renters owe back rent. This is down from a peak of over 20% in January, but a lot of renters are still facing hardships, particularly renters of color and renters with children. Nearly one in four Black renters report being behind on rent.

A key factor will be whether the hundreds of state and local emergency rental assistance programs around the country can get these funds out the door quickly enough. The hardest-to-reach renters are also the most vulnerable to eviction, and that group is large enough to cause an unprecedented spike in eviction filings, warrants and, ultimately, homelessness if we don’t remain focused on getting them and their landlords the assistance Congress has made available.

When the CDC eviction moratorium expires, where do you expect evictions to climb the most?

I would expect evictions to rise the most in places where housing costs are high or climbing, demand is strong and tenant protections are low. That probably means the Sunbelt and the southeastern U.S., though there are likely to be widespread increases.

The economy is bouncing back. Who needs rental assistance in the U.S. now?

The majority of the jobs lost have been in industries that pay low average wages, and disproportionately employ renters, and the Delta variant spike poses a renewed threat. Our research on rent arrears in New York City suggests that the greatest need is concentrated among a small group of households, many of whom were already struggling before Covid hit. As with so many issues, there are troubling racial disparities. Black and Hispanic households are more likely to have lost employment and therefore to be behind on rent.

How important is it to landlords that this money get disbursed?

It’s essential, especially for mom-and-pop landlords who own a small number of properties. For small landlords, the funds are likely to be critical for preventing default, property tax arrears, forced sales, or cuts in repairs and maintenance.

How quickly has the government been able to distribute the money and will the $47 billion that Congress allocated be enough?

Estimates of need suggest the $47 billion will likely be sufficient if they can get it out the door quickly enough. But again, the slow pace has been worrisome. All levels of government need to work together to get the money out quickly and to strongly encourage, or require where possible, landlords to apply for rental assistance before filing an eviction.

Rents are soaring across the U.S. right now. How do you think that will impact the government’s effort to avoid an eviction crisis?

It will likely be more difficult to limit evictions in places with rising rents, as landlords will have a greater incentive to find new tenants willing to pay higher rents. Plus, rent increases will make it more difficult for renters who do lose their homes to find new places to live.

Editor’s note: This interview has been edited and condensed.