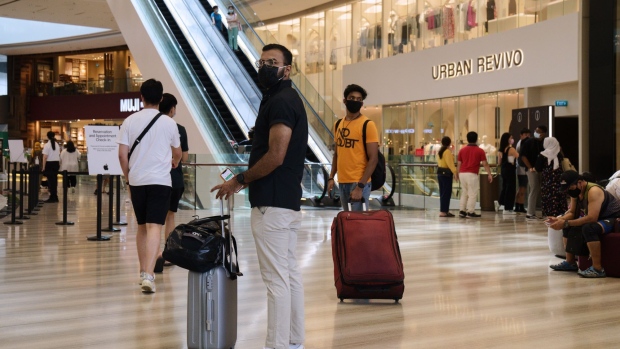 Visitors with suitcases at the Jewel Changi Airport mall in Singapore, on Sunday, Oct. 3, 2021. Singapore Trade Minister Gan Kim Yong said the government is committed to reopening the country gradually after reimposing domestic curbs such as making work-from-home the default and cutting the number of diners to deal with a surge in cases. Photographer: Ore Huiying/Bloomberg , Bloomberg

(Bloomberg) -- Singapore is investigating an “unusual surge” of infections after daily cases jumped to a record 5,324.

New Zealand’s indigenous Maori population criticized the government’s plan to reopen when 90% of all residents are vaccinated. In the U.S., California Governor Gavin Newsom warned infections could surge in the winter and asked eligible residents to get booster shots.

Novavax Inc. filed for authorization of its shot in the U.K. Merck & Co. reached a licensing deal aimed at widening access to its promising pill treatment.

A requirement for federal workers and contractors to be fully vaccinated for Covid-19 -- which would affect a number of transportation companies that work with the U.S. government -- won’t exacerbate a backlog of shipping and deliveries, according to the Biden administration.

“The requirements for federal workers and contractors will not cause disruption,” Jeff Zients, President Joe Biden’s coronavirus response coordinator, said at a Wednesday briefing for reporters.

Organizations that have instituted vaccine mandates have seen overwhelming compliance, and those who refuse will go through education and counseling before any enforcement, Zients added.

“I certainly couldn’t rule that out. At this point I don’t have enough information to be able to make that call but we will know by later in the morning, this morning, what we’re dealing with in Christchurch,”Hipkins told Radio New Zealand. One of the cases has “potentially been infectious in the community for a number of days,” he said, and has “the potential to throw up a number of additional cases.”

Australians can prepare for safe overseas travel when borders start reopening from Nov. 1. The government has reinstated country-specific travel advice levels for 177 destinations, it said in a statement.

California Governor Gavin Newsom, who received Johnson & Johnson’s single-dose vaccine in April, got Moderna Inc.’s shot as a booster Wednesday. He urged eligible residents to get boosters as soon as possible, warning of the prospects of a winter surge in virus cases.

He pointed to data last year, when California had a relatively low case rate in October, only to see infections triple in November and again in December.

“This is an incredibly important time,” he said at a press briefing Wednesday. “We know the ticket out of this pandemic is getting these booster shots and getting the unvaccinated vaccinated. And we still have more work to do.”

New York is gearing up to vaccinate younger children as soon as federal guidance is available, Governor Kathy Hochul said. U.S. Food and Drug Administration approval of Pfizer Inc.’s vaccine for children could come this week.

The state has ordered 380,100 pediatric doses for children ages 5 to 11, and has been working with pediatricians, pharmacies and schools to prepare for the vaccination effort, Hochul said at a Covid briefing on Wednesday. “This is really a breakthrough.”

For the 900,994 children aged 12 to 15 years old who are already eligible, 63.6% have received at least one dose, according to state data. The overall first-dose vaccination level for New Yorkers age 18 and older is 86.8%.

New Jersey will be prepared to vaccinate younger children as soon as approval is granted, Health Commissioner Judith Persichilli said.

The state has 760,000 5-to-11-year-olds and has preordered 205,000 pediatric Pfizer doses. All 21 counties will have sites ready to vaccinate children, Persichilli said Wednesday.

The three parties negotiating to form Germany’s next government agreed to end emergency pandemic legislation that empowers regional authorities to close schools, limit travel or ban cultural events. The agreement means the legislation will expire at the end of next month.

The SPD, Greens and FDP, who are aiming to have their coalition in place at the beginning of December, are counting on milder measures to keep the coronavirus under control, caucus officials said,

“In short, there won’t be another lockdown,” the SPD said in a statement, adding that the goal is to get through the winter “responsibly” and “put the pandemic behind us in the spring.”

Novavax Inc. applied for authorization of its Covid-19 vaccine in the U.K., the first submission for a protein-based shot against the disease in the region.

The company has completed its rolling submission -- an accelerated review of trial and manufacturing data -- with the Medicines and Healthcare products Regulatory Agency and filed for a conditional marketing license, Gaithersburg, Maryland-based Novavax said in a statement Wednesday. The shares rose 13% in U.S. premarket trading.

The drugmaker is planning to apply for authorization in the U.S. by year-end, according to the statement. An application for emergency authorization from the World Health Organization was made last month.

Latvia reported a record 3,206 new cases on Wednesday, as the Baltic country struggles to stop a surge that led to a new lockdown. The government will consider mobilizing private doctors to handle increased hospitalizations, and the Latvian doctors society demanded the resignation of Health Minister Daniels Pavluts.

Poland reported 8,361 new cases, a 28% rise from a week earlier and the most since the end of April, as the virus continues to surge across eastern Europe. The government has so far refrained from imposing new restrictions, focusing mainly on boosting hospital capacity.

The number of working hours lost due to the Covid-19 crisis will be “significantly higher” than projected just a few months ago, according to the International Labor Organization.

In what it termed a “dramatic revision,” the Geneva-based group now estimates that global hours worked this year will be 4.3% below their pre-pandemic level, the equivalent of 125 million full-time jobs. Africa, the Americas and Arab States were the regions that experienced the biggest declines.

Chancellor Angela Merkel is worried about the latest increase in infections in Germany and the burden that may place on the country’s hospitals.

“The question now for the chancellor is at what point we should start talking about new measures,” her chief spokesman, Steffen Seibert, said at a regular news conference. Merkel, who will rule in a caretaker capacity until the next government is formed, is ready to discuss such measures with Germany’s 16 federal states at any time, Seibert added.

Germany recorded more than 23,000 new infections and 114 deaths from the virus on Tuesday, according to the latest data from the RKI public-health institute.

The accord with the United Nations-backed Medicines Patent Pool will help make the antiviral therapy available in more than 100 low- and middle-income nations if it gains approval, allowing generic-drug companies to apply for licenses to make the experimental drug, according to a statement Wednesday.

The economies that have embraced reopening as vaccination curbed deaths around the world have become the best places to be in the pandemic in October, with Ireland topping Bloomberg’s Covid Resilience Ranking for a second consecutive month.

Spain and the United Arab Emirates round out the top three. Southeast Asian countries continue to rank lowest, with Indonesia, Malaysia, Thailand, Vietnam and the Philippines in the bottom six for the third month.

But the looming northern-hemisphere winter, along with loosening Covid curbs globally, will test the strategy of vaccinated reopening. Already, places like Ireland, the U.K. and Belgium are seeing a worrying uptick in cases as the weather cools.