The Bank of Canada expressed growing confidence the country’s economy is rebounding from its recent soft patch, solidifying Governor Stephen Poloz’s status as one of the world’s more upbeat central bankers.

In a decision Wednesday, policy makers in Ottawa left interest rates unchanged for a fifth straight time and continued to indicate they see no need to move borrowing costs anytime soon. They said recent data has “reinforced” their view a slowdown at the end of 2018 and early 2019 was temporary, while acknowledging mounting global trade risks were “heightening uncertainty” around the outlook.

Poloz has clung to the idea that his next step is probably higher, even as investors question the health of the global economy and bet the world’s central bankers are poised to cut in coming months. The Bank of Canada’s statement on Wednesday, for example, came amid a fresh bout of risk aversion in global markets on concern the trade war between the U.S. and China will escalate.

“They are trying to signal to people that they are not going to cut rates any time soon,” Benjamin Tal, deputy chief economist at CIBC World Markets, told BNN Bloomberg. “The bank is saying: I am not cutting, read my lips.” 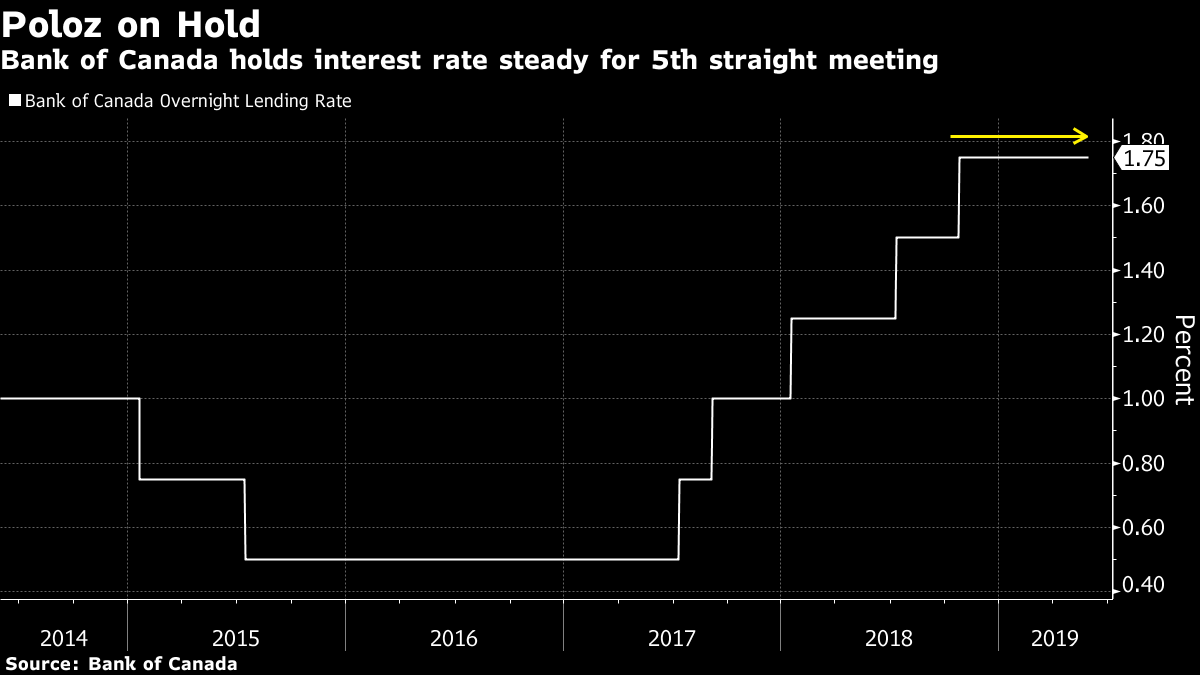 The Bank of Canada’s 1.75 per cent benchmark remains below what it believes would be the “neutral rate” if no headwinds were present in the economy. The continued reference to policy being accommodative is a signal policy makers still hold this belief.

The central bank has clearly been buoyed by a recent run of data showing an acceleration in growth, after the expansion came to a near halt at the end of last year, due to troubles in the oil sector and the impact of an unusually harsh winter.

The positive tone in Wednesday’s statement included several references to a rebound. Evidence is “accumulating” that growth has begun to pick up in the second quarter, it said, citing indicators that point to stabilization in housing, recovering production in the oil sector, stronger consumer spending and exports and a firming of business investment, along with employment gains.

“Continued strong job growth suggests that businesses see the weakness in the past two quarters as temporary,” policy makers said.

Inflation, meanwhile, has also been in line with expectations, and is expected to remain around the 2 per cent target, the Bank of Canada said, adding the lifting of U.S. metals tariffs and better prospects the new North American trade pact will be ratified have “positive implications for Canadian exports and investments.” The global economy is also evolving as expected, it said.

What the Bank of Canada decision means for borrowers and savers

Dale Jackson breaks down what the latest Bank of Canada interest-rate decision means for your personal finances.

“There looks to be a little more confidence in the growth rebound narrative while rising trade tensions are a brake on global growth prospects,” said Shaun Osborne, chief foreign-exchange strategist at Scotiabank.

The negatives were largely confined to three things: worries about the recent escalation of trade conflicts between China and the U.S., the impact of Chinese restrictions on Canadian canola exports and a reference to a sharp rise in inventories in the first quarter that may damp production in coming months.

Poloz had been one of the most emphatic rate hikers over the past two years, raising borrowing costs five times since the middle of 2017, until hitting the pause button amid the downturn late last year.

Most analysts predict the Bank of Canada will resume raising interest rates again sometime next year -- in line with the central bank’s forecasts the economy will return to growth of around 2 per cent in 2020.

Investors are more pessimistic, betting on cuts rather than hikes. They see about an 80 per cent chance of one cut over the next 12 months. In the U.S., conviction on lower rates is even stronger, with as many as three rate cuts priced in over that period, fueled by escalating trade tensions between the U.S. and China, faltering global growth and soft inflation readings in the U.S.