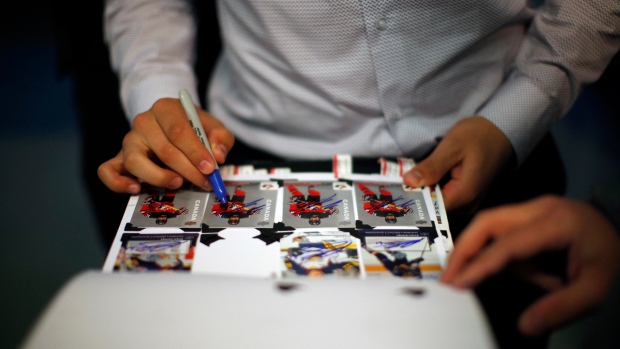 Vegas Golden Knights centre Nick Suzuki signs his hockey cards for a fan during the second round of the NHL draft at Rogers Arena in Vancouver, Saturday, June 22, 2019. THE CANADIAN PRESS/Chad Hipolito

Upper Deck Co. has signed a multiyear deal with the National Hockey League and its players’ union to extend the license to make trading cards, securing a key partnership as rivals grapple with a recent shake-up in the collectibles market.

The new agreement, which lasts at least five years, adds digital cards to the mix as collectibles businesses try to capitalize on the increasing popularity of such assets. Financial terms were not disclosed.

The NHL was an “active listener” in the marketplace before deciding to go with Upper Deck, said Brian Jennings, the league’s chief branding officer. “At this time it was best to maybe zig while other people were zagging.”

Prices for trading cards from baseball to Pokemon have skyrocketed as investors look for alternative places to put their cash. EBay Inc. said in August that sellers moved US$2 billion worth of cards on its site in the first half of the year in North America alone.

Upper Deck, a privately held company based in Carlsbad, California, has held NHL and NHLPA licenses since 1990. In July, it signed a new exclusive deal to make pro wrestling cards with All Elite Wrestling.

The company also has memorabilia agreements with athletes like Michael Jordan, Wayne Gretzky and Tiger Woods and sells entertainment cards with franchises including Marvel and James Bond.