United Parcel Service Inc. fell the most in nine months on concern lower U.S. package volume is a sign the pandemic-fueled delivery boom may be cooling.

“Declining average daily volume and higher than expected unit costs are likely weighing on investor sentiment, with some reading the result as an indication the pandemic-driven demand trend is slowing,” Helane Becker, an analyst with Cowen Inc., wrote in a note after UPS’ earnings release.

The company’s shares sank 8.7 per cent to US$191.44 as of 9:57 a.m. in New York, the biggest intra-day drop since October 28. They’d advanced 25 per cent this year through Monday, topping rival FedEx Corp.’s 15 per cent gain and the 17 per cent increase of a Standard & Poor’s index of U.S. industrial companies. 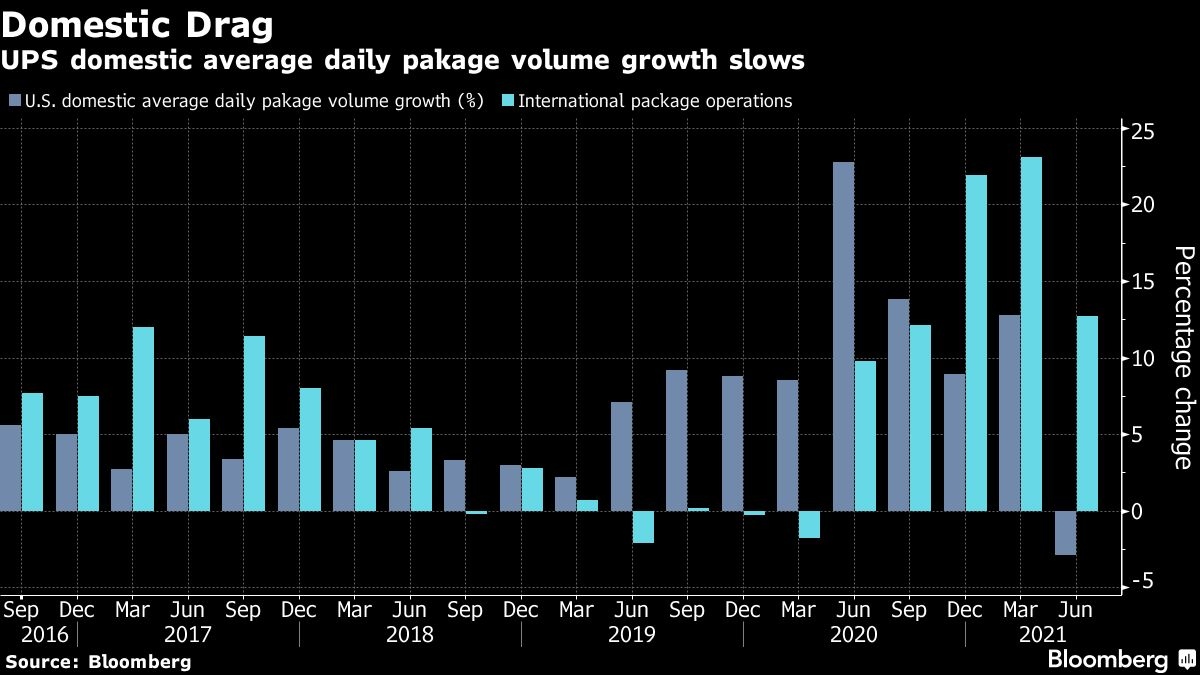 UPS’ average daily volume of shipments from businesses to homes in the second quarter fell 15.8 per cent compared with a year ago.

The Atlanta-based courier and Fedex have seen profits soar from the rise of online shopping as Covid-19 accelerated a long-term consumer shift away from stores. But that trend may have peaked as consumers return to more brick-and-mortar shopping.

“As the economy re-opened, customers went back to those stores,” Chief Executive Officer Carol Tome said on a conference call with analysts.

Shareholder expectations for UPS earnings have been rising along with package demand. In a presentation on June 9, Tome said the company’s operating margins would grow as high as 13.7 per cent in 2023, while sales would rise at a 10 per cent-a-year clip through that period. But that failed to impress investors as the shares fell the most in six months that day.

UPS’ mixed 2Q results drove earnings above expectations but may have tempered consensus for the year. International and Supply Chain Solutions offset the fact that Domestic failed to shine as bright as anticipated.

For 2021, the full-year forecast for an operating margin of 12.7 per cent that UPS announced Tuesday matched analyst estimates but undershot more buoyant first-half figures.

“Broadly, we think the results were generally in line with buy-side expectations,” Allison Landry, an analyst with Credit Suisse AG, said in a research note. “This may not be enough.”

UPS’s adjusted earnings rose to US$3.06 a share in the second quarter. Analysts had predicted US$2.83. Sales advanced 14 per cent to US$23.4 billion, in line with estimates.

Tome, who took the helm just over a year ago, has emphasized her goal of making UPS “better not bigger.” In one move under her leadership, UPS sold its low-margin freight business this year. She also is focusing on serving smaller firms, which tend to pay full price for shipments, and discounting less to win large shippers.

UPS faces the challenge of lower profitability from its residential business, which typically involves fewer packages per stop than business deliveries.

Costs have also risen because of measures to protect workers from the coronavirus. In addition, Tome has ramped up spending to speed up deliveries, such as putting packages on express trucks instead of trains, to catch up with rival FedEx’s transit times.

While the hefty e-commerce demand may ease as vaccines allow people to return to stores, business packages will also increase as more workers head back to the office. At least through the next couple of years, package demand will outstrip couriers’ last-mile delivery capacity, Tome has said.