United Parcel Service Inc.’s shares dropped the most since 2015 as investors looked past surging sales to focus on rising costs.

Profit margins will be pressured this quarter as the company accelerates investment to speed deliveries and absorbs increased expenses to handle peak-season volume, UPS said Wednesday as it reported third-quarter results. Benefits, incentive pay and other items will create an additional drag of US$300 million or more.

The outlook sullied UPS’s second earnings report under Chief Executive Officer Carol Tome, who took the reins in June and dazzled Wall Street on a quarterly conference call the following month with a pledge to make the courier “better, not bigger.” This time around, she told investors that they’ll have to wait until next year for profit margins to improve at the U.S. unit, where a surge in e-commerce deliveries is fueling expenses.

“UPS continues to have trouble bending the cost curve,” Cowen analyst Helane Becker said in a note to clients. 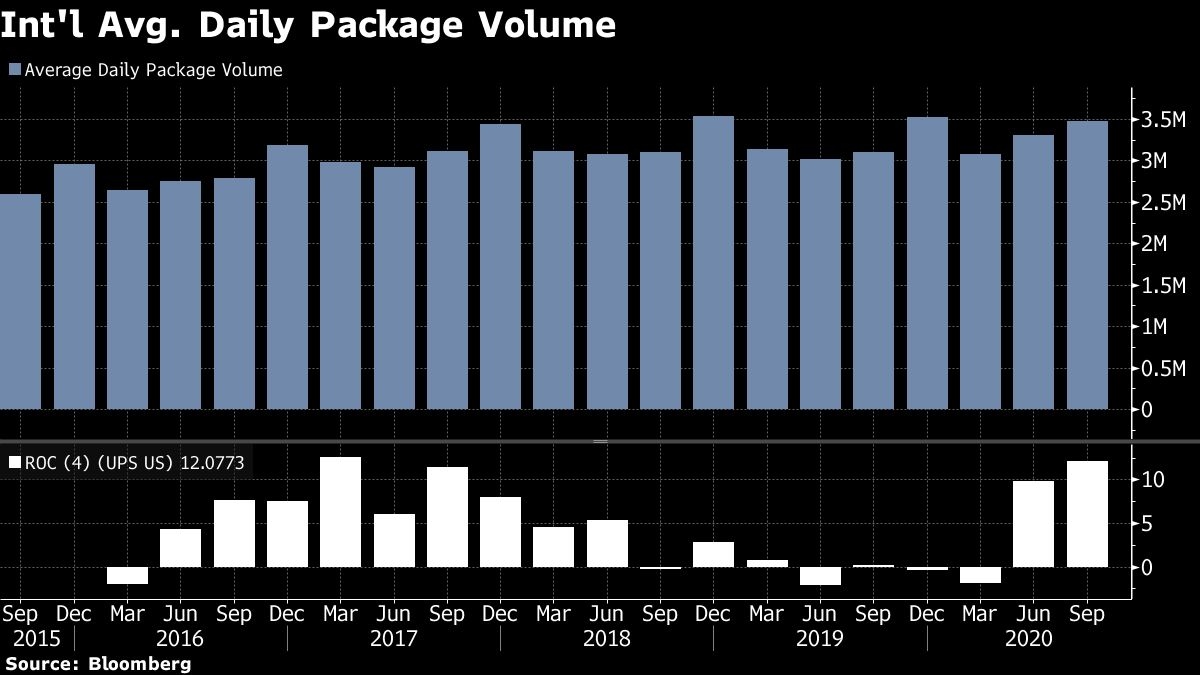 Weighed down as well by a broad market rout, the shares fell 8.8 per cent to US$155.78 at the close in New York for the biggest one-day drop since January 2015. UPS had advanced 46 per cent this year through Tuesday, while the S&P 500 Industrials Index fell 4.9 per cent.

UPS’s sales have soared as consumers turn to online shopping rather than risk going to stores during the pandemic. But the package courier’s costs have climbed from efforts to protect workers and because of the jump in residential deliveries. The Atlanta-based company earns more from commercial customers because more packages are left at each stop.

Adjusted operating profit margin at the U.S. unit fell to 8.6 per cent in the third quarter from almost 11 per cent a year earlier.

Profit and sales topped Wall Street’s expectations, mostly driven by the International and Freight units. Adjusted earnings rose to US$2.28 a share, while analysts predicted US$1.90, according to the average of estimates compiled by Bloomberg. Revenue jumped 16 per cent to US$21.2 billion, exceeding estimates by almost US$1 billion.

UPS plans to “significantly lower” capital spending as the company focuses on improving profitability, said Tome, who became CEO in June. In a capacity-constrained parcel market for this peak season, UPS is willing to walk away from customers that are too price sensitive, she said.