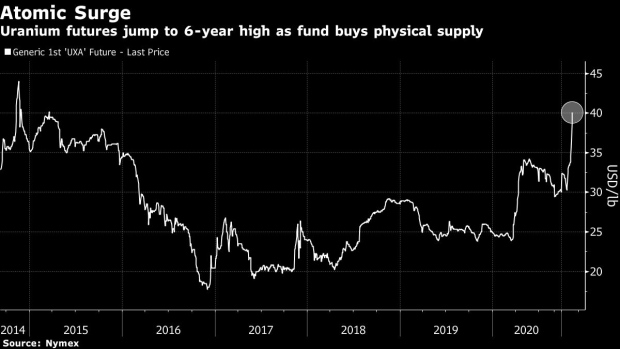 (Bloomberg) -- Uranium, the commodity used to fuel nuclear power plants, has surged to the highest level since 2015 due in part to a single fund aggressively cornering the physical market.

Investment firm Sprott Inc. earlier this year launched its Physical Uranium Trust and recently commented on Twitter about how much physical uranium it had been buying, aiding to the commodity’s recent bull run. Sprott has amassed over 24 million pounds of uranium, sometimes buying more than 500,000 pounds in a single day, according to its website and social media account.

For comparison, total spot volume for 2020 was 92.2 million pounds, according to uranium investor Yellow Cake Plc.

The buying is in addition to already bullish fundamentals. Uranium prices must rise further to spur the restart of production to meet uncovered utility demand after 2023, according to analysts at Raymond James Financial Inc. Earlier this year, NAC Kazatomprom JSC, the world’s top miner of uranium, said it would keep its output at reduced levels through 2023, removing supply from the market.

Energy costs are rising around the world as the recovery in demand from the worst of the Covid-19 lockdowns collides with supply constraints. Power plant fuels -- including natural gas and coal -- are surging to new heights, making it more expensive to operate factories and keep the lights on at home, compounding the inflationary pressure already resulting from strained supply chains.

Uranium futures on Nymex surged by 15% last week, making it the best weekly gain in more than a decade and before the 2011 Fukushima nuclear disaster crashed demand for the commodity. They’re now trading at the highest level in six years and are showing little sign of letting up.

Sprott noted in a July presentation that 2021 was already “slated to be the strongest non-utility buying year over the past decade.”

The rally has benefited Cameco Corp., one of the world’s largest suppliers of uranium, which has seen its stock price rise to the highest level since 2014. Australian uranium shares, such as Paladin Energy Ltd. and Toro Energy Ltd. have also jumped.