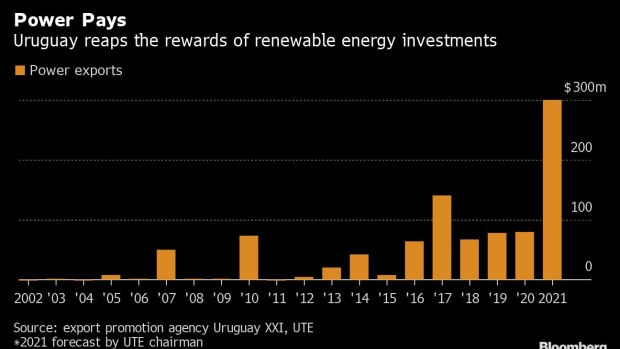 “We expect to continue helping them through the end of the year. The situation is very critical for Brazil,” Emaldi said at an event in Montevideo.

The South American country of 3.5 million people enjoys an energy surplus after investors poured billions of dollars into wind, solar and biomass power the previous decade. In contrast, Brazil’s outsized dependence on hydroelectricity has pushed it to the brink of rationing after years of drought.

Uruguay sold 1,447 gigawatt hours for about $203 million to Argentina and Brazil in the first eight months of 2021, handily surpassing the full-year high of $141 million in 2017.

UTE could have more power available for export next year on expectations that higher rainfall will replenish Uruguay’s hydroelectric reservoirs, Emaldi said.