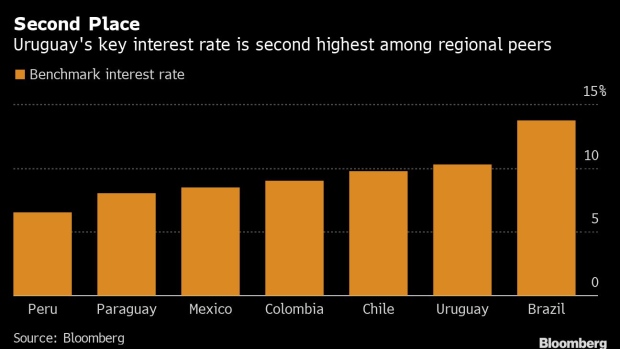 Shoppers wearing protective masks ride an escalator at a mall in Montevideo, Uruguay, on Friday, Dec. 18, 2020. Nine months after recording its first coronavirus case, Uruguay is seeing an outbreak in what President Luis Lacalle Pou has called the "first wave," threatening to undo the hard-fought gains throughout the pandemic. Photographer: Ana Ferreira/Bloomberg , Bloomberg

(Bloomberg) -- Uruguay’s central bank raised its key interest rate for a ninth consecutive meeting to 10.25% with inflation expectations remaining stubbornly above its target.

Policy makers tightened by 50 basis points and signaled more half point hikes later in the year. The increase Monday marked the first time the central bank lifted borrowing costs into the double digits since it returned to using a benchmark rate as its main policy tool in September 2020.

With further tightening, the key rate “would reach the end of the year at levels consistent with the convergence of expectations toward the target range,” the central bank said in a statement.

The central bank didn’t rule out adopting an even more restrictive policy bias if inflation expectations are slow to approach its 3%-6% target.

Easing commodities prices, especially oil, have yet to translate into a significant cooling of inflation across Latin American. Countries like Uruguay, Chile and Mexico that are still grappling with rising inflation are expected to keep tightening monetary policy in the second half of the year.

Last month, inflation in Uruguay accelerated to 9.56% led by rising prices for food, healthcare and tourism services. July marked the fastest inflation since the 9.59% observed in November 2020.

The central bank is scheduled to publish its monthly inflation expectations survey Tuesday.

Policy makers said the economy continues to expand in the third quarter, but at a slower pace than that observed in the April-June period.