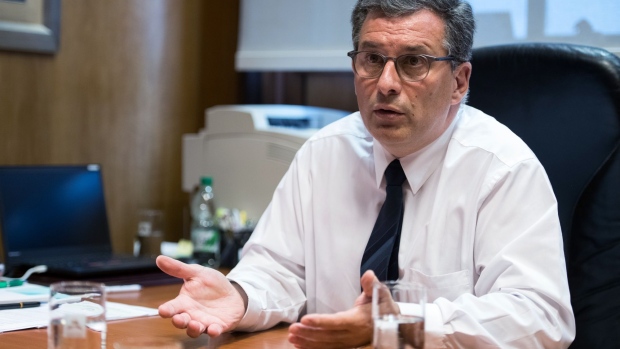 (Bloomberg) -- Uruguay will gauge investor appetite for developing massive green hydrogen projects in the south Atlantic when it starts the tender of 10 offshore wind power blocs in the coming months covering an area the size of Delaware.

State energy company Ancap plans to publish bidding rules for offshore blocs this year and pick the winners in the second quarter of 2023, Chairman Alejandro Stipanicic said. He’s optimistic that some of the more than 40 oil drillers and renewable firms that inquired about the auction will submit bids. The power is earmarked for electrolyzers that strip hydrogen from water.

“We are offering blocs that have a certain potential that in our judgment justifies multibillion-dollar investments,” Stipanicic said in an interview. “It’s an offer that has attracted the attention of players that already said ‘we are decided to go for those blocs’.”

Oil majors like BP Plc and Shell Plc are pivoting to hydrogen at a time when countries are seeking to limit global warming and bolster energy security after Russia’s invasion of Ukraine. Global output of clean hydrogen could surge as much as 18-fold to 11.6 million metric tons a year by 2030 with strong backing by governments, according to BloombergNEF.

In a good year, Uruguay generates more than 95% of its electricity from renewable sources thanks to investments that poured into wind, solar and biomass power in the last decade. Now the administration of President Luis Lacalle Pou is pitching Uruguay’s untapped renewable resources and tax breaks to put the country on the path to becoming a global hydrogen exporter.

Uruguay’s efforts are starting to pay off with Germany’s Enertrag planning to build 350 megawatts of solar and wind power in northern Uruguay to produce 21,000 tons of hydrogen a year from 2025. Enertrag will process the hydrogen into 100,000 tons of e-methanol, potentially for export to Germany.

Each of the blocs Ancap will tender could generate at least 2.1 gigawatts of electricity, enough to make 187,000 tons of hydrogen a year, according to a company presentation. Ancap chose waters no deeper than 60 meters (197 feet) for its first auction so the blocs would be compatible with existing offshore wind power systems, Stipanicic said.

The blocs are free, with Ancap scoring bids on the merits of the business plan, the percentage of profits shared with the government and the minority equity stake offered to the state company. Bloc winners will have 10 years to collect data and even build a pilot hydrogen plant before submitting a development plan for approval or relinquishing the bloc.

“With a certain degree of probability we could see the first wind turbines on the sea and the first production in six years” after Ancap awards the blocs in 2023, Stipanicic said.