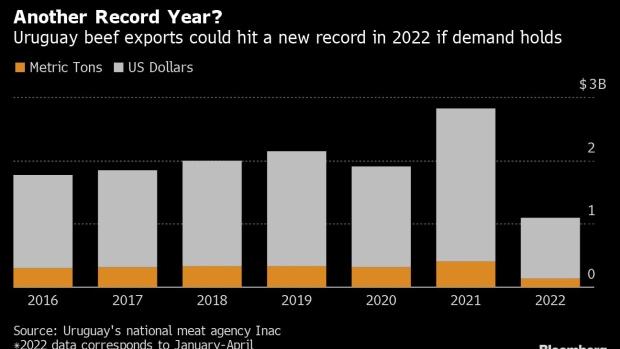 (Bloomberg) -- The Uruguayan meatpacking unit of Japan’s NH Foods Ltd. is seeking carbon-neutral certification for as much as a fifth of the cattle it processes by 2025, betting that wealthier consumers will pay more for food with sustainability credentials.

BPU Meat has been shipping carbon-neutral beef to supermarkets in Japan and Uruguay as well as to Germany’s Block House restaurant chain since March. It expects to process 15,000 certified cattle by the second quarter of 2023 and at least 30,000 within three years through an arrangement with a forestry company, said Daniel de Mattos, a senior adviser to BPU’s board.

“We have to have a major supply of cattle with these characteristics to make this commercially viable.” De Mattos said in an interview from Montevideo. “With those numbers we would be serving very important niche markets.”

With growing greenhouse gas scrutiny worldwide, the beef industry is starting to embrace carbon-neutral certification -- using offsets as well as practices to lower methane emissions, reduced water and energy use and sequestration. In Uruguay, ranching company Mosaica led the way with the first shipment of beef with LSQA certification in December, followed by BPU and a unit of Brazil’s Minerva Foods SA this year.

Under an arrangement between BPU and wood pulp maker Montes del Plata, certification firm SGS validates that emissions of cattle owned by more than 300 participating ranchers are offset by forestry plantations. The program dovetails with NH Foods’ goal of reducing its carbon footprint 40% by 2030, De Mattos said.

So far, carbon-neutral beef fetches prices similar to BPU’s other premium products. De Mattos is optimistic certification will pay off through higher prices and access to wealthier buyers as the market matures. Carbon-neutral certification could become another selling point for Uruguayan beef that is already marketed as hormone free, traceable and largely grass fed.

Uruguayan beef export volume has risen more then 20% this year, with prices up more than 50%. De Mattos sees prices staying at high levels, although prone to volatility in coming months. Unstable meat prices and the surge in input costs due to the war in Ukraine could spur local ranchers to raise fewer cattle.

“We are watching these things with a lot of concern,” De Mattos said. “So far, signs of a slowdown haven’t been seen.”