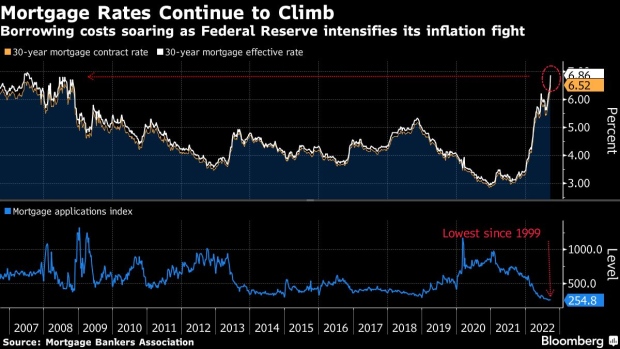 Houses in Albany, California, US, on Tuesday, May 31, 2022. Homebuyers are facing a worsening affordability situation with mortgage rates hovering around the highest levels in more than a decade. Photographer: David Paul Morris/Bloomberg , Bloomberg

(Bloomberg) -- US home loan costs continue to soar as the average contract rate on a 30-year fixed mortgage pushed north of 6.5% last week for the first time since 2008, risking a more pronounced downturn in the housing market.

The 30-year rate has climbed by about half a percentage point in just the last two weeks and more than a full point in the last six, highlighting the speed at which borrowing costs have increased as the Federal Reserve intensifies its inflation fight.

The Mortgage Bankers Association figures Wednesday showed the contract rate increased 27 basis points last week, the most since mid-June. The effective rate, which includes the effects of compounding, rose to a 15-year high of 6.86% in the period ended Sept. 23.

This year’s dramatic rise in mortgage rates is reducing affordability, prompting builders to offer incentives and causing home prices to settle back. S&P CoreLogic Case-Shiller data on Tuesday showed the first monthly decline in prices since 2012.

The report also showed more borrowers are turning to adjustable-rate mortgages, which carry lower introductory rates in exchange for the risk of higher payments in the future. The average contract rate on a five-year adjustable increased to 5.30% from 5.14%.

“With the recent jump in rates, the ARM share reached 10% of applications and almost 20% of dollar volume,” Joel Kan, MBA’s associate vice president of Economic and Industry Forecasting, said in a statement. “ARM loans remain a viable option for qualified borrowers in this rising rate environment.”

Separate data on Wednesday showed contract signings to purchase previously owned homes fell in August for the seventh time this year. The gauge dropped 2% to the second-lowest level since 2011, according to the National Association of Realtors.

Other measures of mortgage rates also put the cost above 6.25%. Last week, Freddie Mac’s data, which is released on Thursdays, showed that the average for a 30-year loan climbed to 6.29% in the week ended Sept. 22. Mortgage News Daily, which updates more frequently, puts the 30-year rate above 7%.

The MBA survey, which has been conducted weekly since 1990, uses responses from mortgage bankers, commercial banks and thrifts. The data covers more than 75% of all retail residential mortgage applications in the US.