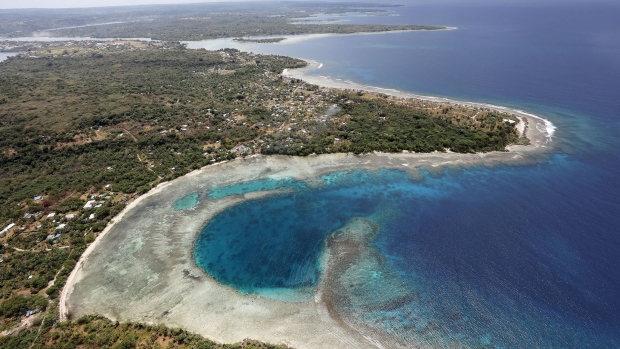 PORT VILA, VANUATU - DECEMBER 07: An aerial view of the coastline on December 07, 2019 in Port Vila, Vanuatu. Satellite data show sea level has risen about 6mm per year around Vanuatu since 1993, a rate nearly twice the global average, while temperatures have been increasing since 1950. 25 percent of Vanuatu’s 276,000 citizens lost their homes in 2015 when Cyclone Pam, a category 5 storm, devastated the South Pacific archipelago of 83 islands while wiping out two-thirds of its GDP. Scientists have forecast that the strength of South Pacific cyclones will increase because of global warming. Vanuatu’s government is considering suing the world’s major pollution emitters in a radical effort to confront global warming challenges and curb global emissions, to which it is a very small contributor. Last year, the country banned single use plastic bags, styrofoam food containers and drinking straws in an effort to contain pollution and set an example to larger nations. (Photo by Mario Tama/Getty Images) , Photographer: Mario Tama/Getty Images AsiaPac

(Bloomberg) -- The US and Australia along with three other allies will form a new initiative that will assist Pacific Island countries in addressing challenges including climate change and security, as concerns about Chinese influence in the region grow.

The UK, New Zealand and Japan will also be part of the Partners in the Blue Pacific pact, an informal mechanism to assist Fiji, Samoa and other small nations in the region, according to a joint statement Friday. High-level officials from the five countries forming the initiative met in Washington on June 23 and 24 for consultations with heads of missions from Pacific nations, and observers from France and the European Union.

“We are united in our shared determination to support a region that benefits the peoples of the Pacific,” according to the statement. “We are also united in how we realize this vision—according to principles of Pacific regionalism, sovereignty, transparency, accountability, and most of all, led and guided by the Pacific Islands.”

US Makes Asia Inroads by Playing Down Need to Oppose China

Australia and New Zealand are racing to bolster ties with their Pacific neighbors after China shocked them in April by signing a security pact with the Solomon Islands. Chinese Foreign Minister Wang Yi toured Pacific island nations in May. Pacific nations will discuss issues around China’s growing interest in the region when leaders of the Pacific Islands Forum meet next month.

The Partners in the Blue Pacific pact will provide closer cooperation and provide more efficient support of Pacific islands’ priorities, according to the statement. Other challenges include the Covid-19 pandemic and growing pressure on rules-based international order.