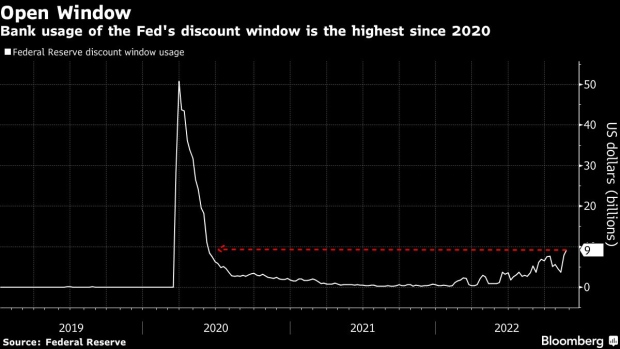 (Bloomberg) -- The Federal Reserve’s campaign to tighten financial conditions has resulted in notably increased borrowing by US banks at the central bank’s discount window, normally a last-resort funding source.

Balances at the discount window rose to $10.1 billion on Nov. 30, the highest level since June 2020, from $9.1 billion a week earlier. Combined with an increase in US banks’ wholesale borrowings, it suggests that banks are losing deposits to higher-yielding alternatives, according to a report by Moody’s Investors Service.

“Discount window credit is intended to be used by banks to cover short-term funding shortfalls and is not intended to be relied upon as a permanent funding source for a bank,” Moody’s analysts Jill Cetina, David Fanger and Donald Robertson wrote. “Ongoing and increasing discount window usage over the past few months could point toward deeper funding weaknesses in some corners of the banking sector.”

The discount window “is generally considered only as a last resort,” so the additional borrowing suggest that some banks “are already facing more significant short-term liquidity pressure” as a result of Fed rate increases totaling 3.75 percentage points since March, Moody’s said.

The rate increases have led to relatively higher yields on alternatives to bank deposits such as money-market funds and Treasury bills. At the same time, the Fed’s balance-sheet reduction measures are reducing the amount of bank reserves in the financial system.

Banks historically have been reluctant to use the discount window out of concern investors view it as sign of operational weakness, a stigma that the Fed has tried to dispel.