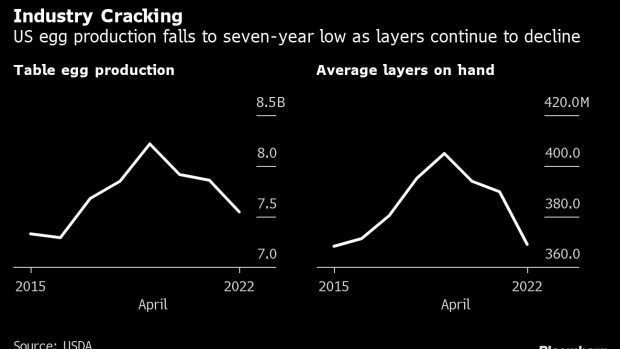 (Bloomberg) -- Production of eggs in the US plummeted in April as millions of hens were killed during one of the worst-ever outbreaks of avian influenza, signaling that retail egg prices will stay high after a surge of about 40% this year.

Table egg production declined 3.9% to 7.55 billion, while the number of egg-laying birds fell 5.3% from a year ago, a US Department of Agriculture report showed Friday. Both are the lowest levels since 2015, the last time the poultry industry was hit with a major bird flu outbreak.

There are signs the outbreak is easing, with the top egg state of Iowa lifting quarantine restrictions on some farms this week.

For consumers paying elevated prices for eggs, relief may be elusive until production rebounds. To date, the outbreak has resulted in the death of nearly 38 million birds.