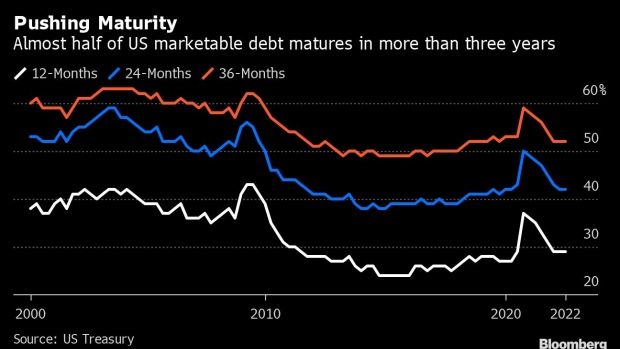 The U.S. Capitol building in Washington, D.C., U.S., on Tuesday, Sept. 21, 2021. House Democrats set up a Tuesday vote on a bill that would suspend the U.S. debt ceiling through December 2022 and temporarily fund the government to avert a shutdown at the end of this month. , Bloomberg

(Bloomberg) -- Like a supertanker, US debt-service costs only change course very slowly. But it’s happening now -- and from Washington’s point of view, the new direction is the wrong one: they’re heading up.

The results of a double jump in the government’s borrowing costs and its debt pile are starting to show up in the federal budget. Monthly net interest payments rose to a record in April, at least in dollar terms. And broader measures of debt expenses are set to climb over the coming years -- potentially squeezing out other kinds of public spending.

That’s because Treasury yields have surged, with inflation running hot and the Federal Reserve in an aggressive tightening mode -- while the national debt has grown by some $6 trillion since the pandemic began, after a series of rescue programs.

But the key number to watch, say economists including Treasury Secretary Janet Yellen, is interest payments as a share of America’s gross domestic product -– essentially, what chunk of the economy has to be channeled into servicing the debt.

That figure has been near historic lows. It’s poised to start a long ascent-– creating fresh headwinds for Washington policy makers who want to spend money on other programs, and potentially making the Fed’s job harder as it tries to quell inflation without causing a recession.

“The Treasury had been shielded somewhat by the Fed’s zero-rate policy, because the amount of outstanding debt went up tremendously but the servicing costs had been unusually low,” says Stephen Stanley, chief economist at Amherst Pierpont Securities LLC. “Now, the combination of the Fed raising rates and rolling off their Treasury holdings is definitely going to create a rising net-interest-cost burden.”

Predicting how big that burden will get, and how fast, is the job of the Congressional Budget Office, which will publish new 10-year projections next week. With borrowing costs as volatile as they are right now, it’s going to be tough.

Ten-year Treasury yields have climbed close to 3%, double what they were at the end of last year. Back in July, when the CBO issued its last forecast, it didn’t expect yields to reach that kind of level until around 2027. The rate on every other maturity has soared too, with 3-month bills reaching 1.04% after trading close to zero throughout last year.

It’s all happening because the Fed started lifting rates in March. Markets are pricing in another 2 percentage points of hikes this year. Next month the Fed will also start “significantly reducing” its $5.8 trillion Treasury holdings, which helped keep yields down.

It takes time for even sharp increases in yields to start squeezing the budget. That’s partly because the Treasury has extended the average maturity to about 6 years, the longest on record, so it doesn’t have to roll over securities as often. Plus, the US is still paying off some bonds it sold long ago when rates were much higher.

That’s why, even though it was in 2020 that rates hit rock-bottom, the average yield on all Treasury debt kept falling until January this year, when it reached a record low of 1.42%. Since then it’s climbed to 1.53%.

“Treasury’s debt services costs are slow-moving and it will depend on how long interest rates stay high,” says Margaret Kerins, head of fixed-income strategy at BMO Capital Markets. “We did have a period after the pandemic of extraordinary low rates. Still, the Treasury is probably looking at about 25% of their debt rolling over in the next few years at higher yields.”

If yields on notes and bonds remain even close to today’s levels, refinancing them will add $41 billion to debt-service costs in 2023 and about $30 billion in 2024, according to Ira Jersey, chief US interest-rate strategist at Bloomberg Intelligence. And assuming Treasury keeps steady its stock of bills, BI calculates that higher rates on that portion of the debt will add about $95 billion a year.

The debt-service-to-GDP ratio stood at 1.5% last year. Back in July, the CBO didn’t expect anything much above that level before 2026, and saw it reaching 2.5% at the decade’s end. The next forecast will likely be gloomier. Bloomberg Economics sees the ratio reaching 3% by 2030.

That means the government will be shelling out hundreds of billions more dollars each year on interest payments -– on top of other fixed costs that are growing too, like health and retirement provisions for an aging population. There’ll likely be other budget pressures as Russia’s invasion of Ukraine drives higher military spending.

Interest costs haven’t been as high as 3% of GDP since the mid-1990s. They caused political headaches then too, adding pressure on then-President Bill Clinton to back away from his spending plans.

Some lawmakers -- like Democratic Senator Joe Manchin, who’s been holding up the Biden administration’s plans to invest in clean energy and social care -- are already raising alarms about the government’s growing obligations.

Yellen, who’s consistently said that the debt-service ratio is the key measure of US fiscal space, told lawmakers last week that it’s not at troubling levels right now. The Fed is likely watching closely too. Even though the central bank and Treasury are independent of one another, many analysts reckon the Fed is cognizant of risks to the economy from interest costs.

“My real concern is that Congress has no backup plan for rising interest costs, after budgeting for years that interest rates will stay low,” says Brian Riedl, a senior fellow at the conservative Manhattan Institute. “Ultimately it might be the bond market that focuses Congress on this issue.”