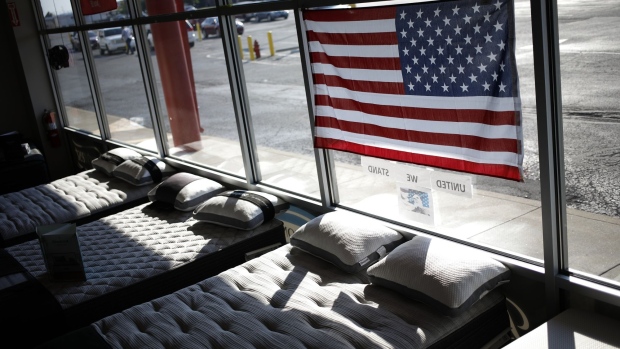 A US flag above mattresses at Charlie Wilson's appliance and TV store in Clarksville, Indiana. Photographer: Luke Sharrett/Bloomberg , Bloomberg

(Bloomberg) -- Orders for business equipment at US factories rose in August by the most since the start of the year, reflecting broad advances across categories, including machinery and computers, even as interest rates rise.

The value of core capital goods orders, a proxy for investment in equipment that excludes aircraft and military hardware, increased 1.3% last month -- the most since January -- after an upwardly revised 0.7% July advance, Commerce Department figures showed Tuesday. The data aren’t adjusted for inflation.

The jump in the core figure exceeded all estimates in a Bloomberg survey of economists. In addition to machinery and computers, orders for primary metals, electrical equipment and communications gear also strengthened.

The figures indicate business investment, a key part of the quest to improve productivity, is so far largely holding up in the face of higher borrowing costs and a darkening economic picture. But risks are increasing that companies will dial back capital spending plans as the Federal Reserve presses on with steep interest-rate increases.

Plus, the broader manufacturing sector is grappling with a deteriorating global economic outlook.

The Commerce Department’s report showed bookings for commercial aircraft, which are volatile from month to month, decreased 18.5%. Boeing Co. reported 30 orders in August, down from 130 in July. While often helpful to compare the two, aircraft orders are volatile and the government data don’t always correlate with the planemaker’s monthly figures.

Core capital goods shipments, a figure that is used to help calculate equipment investment in the government’s gross domestic product report, increased 0.3%. The preliminary estimate of third-quarter GDP will be released in late October.

Orders for military aircraft, which are volatile on a monthly basis, surged in August after slumping in the prior month. Total defense capital goods climbed 10.1%.

The report also showed unfilled orders for all durable goods rose 0.5%, while inventories were up 0.2% for a second month.