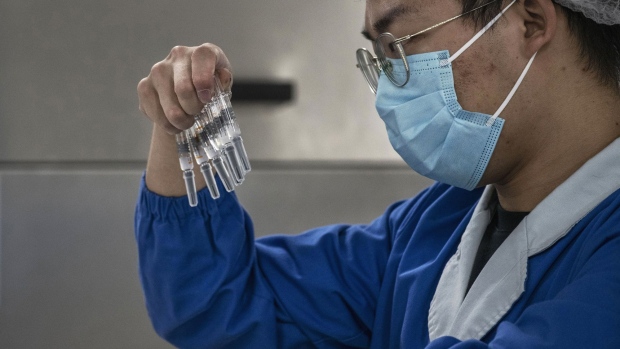 BEIJING, CHINA - SEPTEMBER 24: A worker checks syringes of the potential vaccine CoronaVac on the production line at Sinovac Biotech where the company is producing their potential COVID-19 vaccine CoronaVac during a media tour on September 24, 2020 in Beijing, China. Sinovacs inactivated vaccine candidate, called CoronaVac, is among a number of companies in the global race to control the coronavirus pandemic. The company is running Phase 3 human trials in four countries and ramping up production to 300 million doses per year at a new manufacturing facility south of Beijing. A lack of domestic coronavirus cases in China has meant that companies developing vaccines have shifted their focus overseas to conduct trials to gather the volume of data necessary to win regulatory approvals. When Chinas government launched an emergency use program in July to vaccinate groups of essential workers, Sinovacs chief executive says the company supplied tens of thousands of doses, even as trials are still underway. About 90% of Sinovacs employees have chosen to receive injections of CoronaVac, which is one of eight Chinese vaccine candidates in human trials. The company is also seeking approval to begin clinical trials with teenagers and children as young as age 3.(Photo by Kevin Frayer/Getty Images) , Photographer: Kevin Frayer/Getty Images AsiaPac

(Bloomberg) -- A brewing trade fight between the US and China may unravel a nearly two-year effort to ease intellectual-property rules for producing Covid-19 vaccines and cast further doubt on the World Trade Organization’s reputation as a negotiating forum.

US President Joe Biden’s top trade official in Geneva said any WTO agreement related to Covid-19 vaccines must explicitly exclude China from being able to benefit from the deal.

“The second-largest economy in the world, which has Covid vaccines and mRNA technology, doesn’t need the waiver,” Deputy US Trade Representative Maria Pagan told Bloomberg News in an interview. “What we want is clarity.”

Pagan also said the US would not accept Beijing’s offer to voluntarily opt out of an agreement in return for dropping a provision that currently excludes China. “No, we want it to be clear,” Pagan said.

The Biden administration’s refusal to accept China’s offer could sink a deal that many view as a critical test of the WTO’s relevance after the beleaguered organization failed to advance any multilateral agreements for the better part of the past decade. Founded in 1995 to encourage lower trade barriers and enforce global rules, the institution has struggled to lean against protectionism that’s taken root in longtime globalization advocates like the US and UK.

At the same time, the latest WTO impasse may be welcomed by pharmaceutical groups that argue an IP waiver is unnecessary at a time when the supply of Covid-19 vaccines has outstripped demand.

WTO members are entering a make-or-break period to approve an agreement at their ministerial meeting scheduled for June 12-15. The deal must win unanimous support from all 164 WTO members and any one government can block the adoption of a vaccine IP waiver for any reason.

The talks, which seek to authorize the manufacture of Covid-19 jabs without the consent of patent-rights holders, received a boost this month after a preliminary text was produced by WTO Director-General Ngozi Okonjo-Iweala and four WTO members -- the US, the European Union, South Africa and India.

China, which was initially excluded from the talks, has objected to a key provision that Beijing said would discourage shipments of doses to poorer nations. The current proposal contains a footnote that excludes China because it is the only developing country that exported more than 10% of global Covid-19 vaccine doses.

China’s ambassador to the WTO, Li Chenggang, said the country could not accept the “unreasonable and arbitrary” provision and said it would cast “serious doubt on how the long-held spirits of unity and cooperation could be preserved” at the WTO.

Instead, Li urged WTO members to opt out of the agreement and said China will not avail itself of the flexibilities under the current text as long as the vaccine waiver remains available to all developing members.

The WTO disagreement comes amid a broader US-China trade conflict that’s still simmering between the world’s largest economies. It also reflects long-running US concerns that China has not fulfilled its existing international trade obligations at the WTO -- particularly with respect to the protection of intellectual property.

The Biden administration has largely retained former President Donald Trump’s tariffs on Chinese exports, which were imposed after the US found that Beijing’s policies encourage the transfer of American technology and intellectual property to enterprises in China.