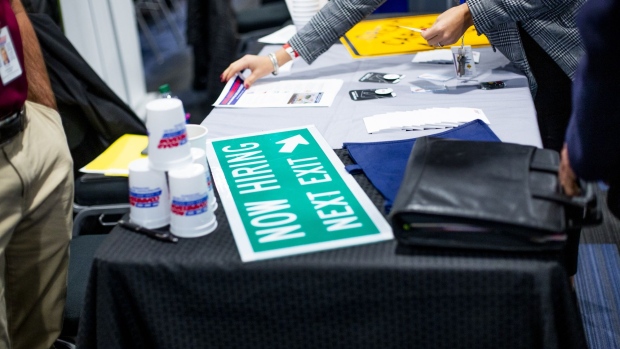 (Bloomberg) -- US companies in May added the fewest jobs since the pandemic recovery began, a private report showed, suggesting employers struggled to recruit and retain workers in the month despite a near-record level of job openings.

Businesses’ payrolls increased by 128,000 last month, held back by a decline in small business employment, according to ADP Research Institute data released Thursday. That followed a downwardly revised 202,000 gain in April, and trailed all estimates in a Bloomberg survey of economists.

The weaker-than-expected figures indicate that companies are still struggling to hire from a limited pool of workers. That said, persistently high inflation combined with a falling savings rate may lure more Americans to work in the coming months.

Such a development would be good news for the Federal Reserve, which is hoping that increased labor-force participation will cool demand for workers, and in turn slow wage growth and inflation. That may take some time to materialize -- a separate report Wednesday showed US job openings fell in April from a record in the prior month, though remained elevated at roughly double the number of unemployed Americans.

The data precede the government’s monthly jobs report on Friday, which is currently forecast to show private payrolls increased by 301,000 in May. The ADP figures don’t always follow the same pattern as the Labor Department’s data.

“The job growth rate of hiring has tempered across all industries, while small businesses remain a source of concern as they struggle to keep up with larger firms that have been booming as of late,” Nela Richardson, chief economist at ADP, said in a statement.

Service-provider employment rose by 104,000 in May, including increases in education and health as well as professional and business services. The leisure and hospitality industry added the fewest jobs since December 2020. Employment at information businesses also declined.

Payrolls at goods producers increased by 24,000, reflecting a gain in manufacturing but a pullback in construction hiring.