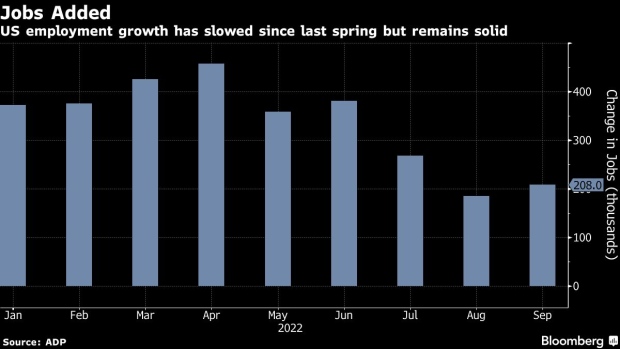 A "We Are Hiring" job posting at a store on the boardwalk in Ocean City, New Jersey, US, on Thursday, Aug. 18, 2022. US inflation decelerated in July by more than expected which may take some pressure off the Federal Reserve to continue aggressively hiking interest rates. , Bloomberg

(Bloomberg) -- US companies hired at a solid clip in September, suggesting demand for workers remains healthy despite rising economic uncertainty.

Businesses’ payrolls rose 208,000 last month after an upwardly revised 185,000 gain in August, according to data from ADP Research Institute in collaboration with Stanford Digital Economy Lab. The median forecast in a Bloomberg survey of economists called for a 200,000 advance.

While there are some signs of moderation in labor demand, the ADP data reinforce what’s still a strong jobs market, complicating efforts by the Federal Reserve to cool decades-high inflation without triggering a jump in unemployment. Applications for unemployment insurance remain historically low, and while job openings are coming down, they’re still extremely elevated.

Nearly three-fourths of the increase in private payrolls last month was driven by a surge in employment in trade, transportation and utilities. Employment in manufacturing and mining declined. Payrolls in financial activities also fell, to the lowest level since December 2020.

The South again added more jobs than any other regions.

The data precede the government’s payrolls report on Friday, which is forecast to show another month of robust job creation and the unemployment rate holding near a 50-year low.

The report also includes fresh insights into wage growth. Those who changed jobs experienced a 15.7% pay increase from a year ago. That compared with a 7.8% gain for those who stayed at their job, the most in at least two years. Wage growth for people who didn’t switch employers was driven by large companies.

“We are continuing to see steady job gains,” Nela Richardson, chief economist at ADP, said in a statement. “While job stayers saw a pay increase, annual pay growth for job changers in September is down from August.”

After a brief hiatus over the summer, ADP returned with its employment report last month to include updated methodology and historical jobs data on a monthly and weekly basis for the last 12 years. The figures are based on payroll transactions of more than 25 million US workers.