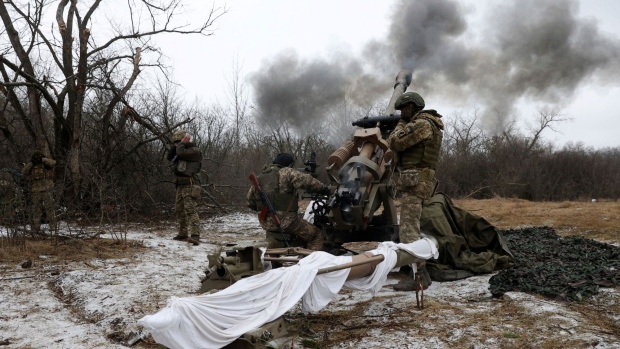 (Bloomberg) -- The Biden administration has confronted China’s government with evidence that suggests some Chinese state-owned companies may be providing assistance for Russia’s war effort in Ukraine, as it tries to ascertain if Beijing is aware of those activities, according to people familiar with the matter.

The people, who asked not to be identified discussing private deliberations, declined to detail the support except to say that it consists of non-lethal military and economic assistance that stops short of wholesale evasion of the sanctions regime the US and its allies imposed after Russian forces invaded Ukraine.

The trend is worrying enough that US officials have raised the matter with their Chinese counterparts and warned about the implications of supplying material support for the war, the people said, though they declined to provide details of those contacts. President Xi Jinping has avoided criticizing Russia over the war but has also offered to play a role in peace talks and come out against the use of nuclear weapons in the conflict.

A spokeswoman for the National Security Council declined to comment, as did the Central Intelligence Agency. The Chinese Embassy in Washington didn’t respond to two emails seeking comment. While the information isn’t clear-cut and remains the subject of debate, US officials said they agree the Russia-China relationship is extremely close now and China is doing more than it once did in support of Russia.

The people familiar with the administration’s thinking characterized the state-owned enterprises’ activities as knowingly assisting Russia in its war effort. They didn’t elaborate on what evidence the administration might have to support that view.

The administration is reviewing the evidence it’s accumulated to determine its significance. A finding that Chinese companies were supporting the invasion would have troubling implications on US policy toward both Russia and China.

Asked about the development by reporters in a briefing Tuesday, White House Press Secretary Karine Jean-Pierre said that the US is “closely monitoring the situation” and went on to reiterate the administration’s ongoing support for Ukraine.

“We will continue to communicate to China the implications of providing material support to Russia’s war against Ukraine. We have talked about this many times that we will be very clear what it means to support Russia’s aggression against Ukraine,” Jean-Pierre said. “And, as I’ve said many times, as my colleagues from NSC has said many times, we will continue to support Ukraine and the Ukrainian people as long as needed.”

The US strategy over Ukraine rests in part on isolating President Vladimir Putin’s government and seeking to choke off his economy and hinder the war effort. Increased support from China, the world’s second-biggest economy, could significantly undercut that strategy.

And if Biden and his advisers determined China’s government was involved in or tacitly accepted the actions of those state-owned enterprises, they would be forced to decide how much to push back. That could risk opening a whole new area of dispute at a time when the US has sought to balance its desire for stabilized ties with Beijing against moves to limit Chinese access to high-end mircochips and confront China over what it sees as a more aggressive posture toward Taiwan.

Treasury Secretary Janet Yellen met Vice Premier Liu He last week and US Secretary of State Antony Blinken is set to visit Beijing in February, the first such visit since the Covid-19 outbreak shut down travel in early 2020.

Russia and China declared a “no limits” relationship before the war and US officials believe that China initially intended to sell lethal weapons to Russia for use in the battlefield. But the administration views China as having scaled back that plan and argues it isn’t doing as much as it could to help Putin’s invasion, the people said.

The administration believes China’s government wants to help Russia and isn’t neutral as it claims, according to the people. China has also deepened its trade relationship despite US demands that other nations distance themselves from the Russian economy.

China on principle rejects any sanctions apart from those agreed at the United Nations, and views American calls on other countries to restrict trade as a violation of sovereignty. China’s imports from Russia grew by nearly 50% from a year earlier in 2022, while exports rose 13%.

There are thousands of state-owned enterprises in China, some directly controlled by the central government with chief executives who rank equal to ministers and others that are subject to less direct supervision. All of them are subject to Communist Party influence, even if the details of their operations are not always monitored in detail.

The trend would only exacerbate what US officials have said in public is a problem. After meeting a senior Chinese official in July, Blinken said he had relayed his concern about China’s “alignment with Russia.”

In late December, Xi and Putin held a phone call in which they agreed to cooperate on trade, energy, finance and agriculture, according to Chinese state television. Xi told Putin Beijing would continue to play a constructive role in seeking to resolve the Ukraine “crisis,” though the road to peace talks won’t be smooth, the broadcaster said.

Yet deepening support for Moscow would cut against recent indications that China is trying to improve ties with the US after months of heightened tension. After meeting in Bali last year, President Joe Biden and Xi said that “a nuclear war should never be fought” and that they oppose “the use or threat of use of nuclear weapons in Ukraine,” according to the White House statement.