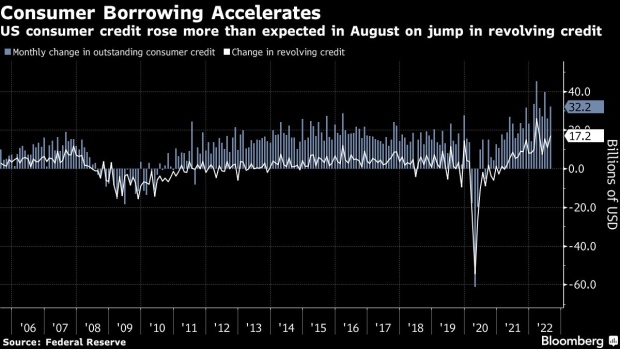 (Bloomberg) -- US consumer borrowing rose in August by more than forecast as credit-card balances increased by the most in five months.

Total credit increased $32.2 billion from the prior month, Federal Reserve figures showed Friday. The median forecast in a Bloomberg survey of economists called for a $25 billion advance. The figures aren’t adjusted for inflation.

Consumer prices are surging across the economy, and while wages are also rising, the rapid pace of inflation is challenging Americans’ ability to pay for both necessities and discretionary purchases. Many are digging into savings, or relying on credit cards to keep up.

The Fed’s report showed the impact of the Fed’s recent hikes in interest rates. The commercial bank rate on credit-card plans increased to 16.27% in August from 15.13% in the second quarter. For a five-year loan on a new car, the rate was 5.5%, up from 4.85%.

Separate data on the distribution of household wealth released last month by the Fed showed consumer debt, including credit cards, rose to an all-time high for the 118 million US households among the bottom 90%.