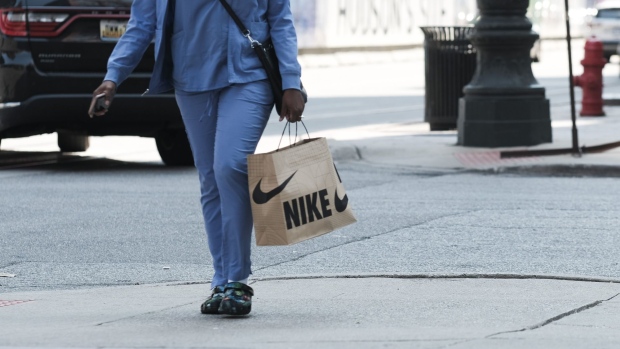 (Bloomberg) -- US consumer confidence rose for a second month in September to the highest since April, indicating a strong job market and lower gas prices are contributing to more optimistic views of the economy.

The Conference Board’s index increased to 108 from a 103.6 reading in August, data Tuesday showed. The median forecast in a Bloomberg survey of economists called for a reading of 104.6.

A measure of expectations -- which reflects consumers’ six-month outlook -- climbed to 80.3, the highest since February, while the group’s gauge of current conditions advanced to a five-month high of 149.6.

Consumer confidence has picked up on the heels of relief at the gas pump and a robust job market. However, it’s still depressed compared to pre-Covid levels as inflation remains stubbornly high and the Federal Reserve raises interest rates, both of which may threaten Americans’ propensity to spend.

Buying plans for major appliances and cars improved, while those for homes fell amid rising mortgage rates.

A separate report Tuesday showed US sales of new homes unexpectedly rose in August, representing a break in an otherwise rapid descent of the housing market this year.

At the same time, the median inflation rate seen over the next 12 months dropped in September to the lowest level since the start of the year. Separate data on inflation-adjusted consumer spending will be released Friday.

“Consumer confidence improved in September for the second consecutive month supported in particular by jobs, wages and declining gas prices,” said Lynn Franco, senior director of economic indicators at the Conference Board.

“Looking ahead, the improvement in confidence may bode well for consumer spending in the final months of 2022, but inflation and interest-rate hikes remain strong headwinds to growth in the short term,” she said.

The share of consumers who said jobs were “plentiful” increased to 49.4%, a historically elevated level. Six months from now, more respondents expected business conditions to improve.

That said, they’re more mixed about their short-term financial prospects.