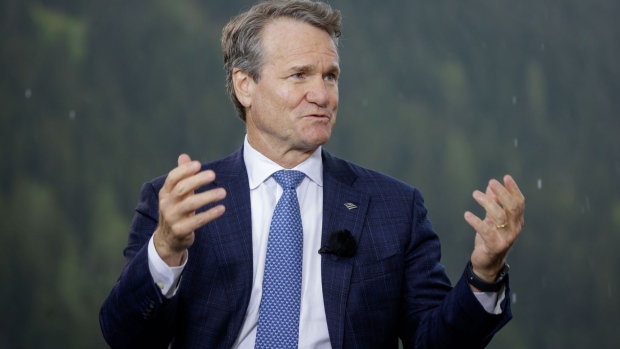 Brian Moynihan, chief executive officer of Bank of America Corp., during a Bloomberg Television interview on day two of the World Economic Forum (WEF) in Davos, Switzerland, on Tuesday, May 24, 2022. The annual Davos gathering of political leaders, top executives and celebrities runs from May 22 to 26. , Bloomberg

(Bloomberg) -- Consumers in the US are holding up well against inflation, increasing their spending and paying down their credit-card balances, Bank of America Corp. Chief Executive Officer Brian Moynihan said.

Account balances are “multiples” higher than they were before the pandemic, Moynihan said in a Bloomberg TV interview at the World Economic Forum in Davos, Switzerland, Tuesday.

In the first two weeks of May, consumers spent 10% more than they did last year, Moynihan said, adding that the increase outpaces any effect that would be attributable to rising inflation. The CEO said he doesn’t expect consumer spending to slow anytime soon.

Speaking earlier in the day, Moynihan got into the debate surrounding ESG ratings and regulation, suggesting that the irritation voiced by Elon Musk and others over how scores are generated isn’t entirely misplaced.

The comments come after the Charlotte, North Carolina-based bank said it would raise its minimum hourly wage to $22 this week, taking another step toward a goal of paying $25 by 2025, as employers beef up compensation and benefits in a tight labor market.