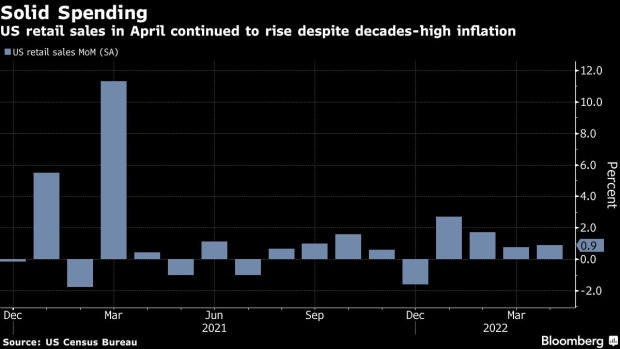 (Bloomberg) -- US economic data and earnings from two retail bellwethers indicated American consumers are spending with plenty of gusto, though cracks in the foundation of the economy are starting to form.

“Whether they are relying on credit, drawing down excess savings or simply saving less of their monthly income to fund purchases, the April data show little signs of an impending slowdown,” Wells Fargo & Co. economists Tim Quinlan and Shannon Seery said in a note.

Still, “as we look out into the rest of this year and beyond, we expect that the apparent superpower of consumers to defy gravity will eventually wear off.”

The value of receipts at retailers rose a broad-based 0.9% in April, indicating that demand for merchandise remains resilient despite rampant inflation, a Commerce Department report showed. Nine of 13 retail categories rose in April, including outlays for discretionary items like apparel, electronics and furniture.

Additionally, US factory production continued to rise at a robust pace in April, showing manufacturers are making strides meeting steady consumer demand and investment growth. And there are no imminent signs of a slowdown in demand by American consumers judging by the number of goods-laden containers arriving at the Port of Los Angeles, according to Executive Director Gene Seroka.

“High prices haven’t yet deterred consumers from continuing to binge on goods, and there were signs that discretionary spending in particular strengthened in recent months as the economy emerged from omicron,” Omair Sharif, founder of Inflation Insights LLC, said in a note.

The figures add to signs of overheated demand that’s likely to keep the Federal Reserve on track to raise interest rates by a half percentage point at each of its next two meetings, following a similar increase earlier this month. While the Fed hopes to tame inflation by cooling demand, it runs the risk of going too far and tipping the US into a recession.

So far, though, consumer spending has powered ahead. Home Depot Inc. and Walmart Inc. reported better-than-expected same-store sales in the latest quarter.

At Walmart, a 3% increase in same-store sales excluding fuel topped estimates and the retailer boosted its sales outlook. Shares stumbled, however, as inflationary pressures, especially in food and fuel, weighed on profit margins.

Walmart’s report also pointed to signs of worsening stress on lower-income consumers. The retailer’s US grocery sales posted a percentage increase in the low double digits during the three months ending in late April, while general merchandise tumbled by a comparable magnitude. Meanwhile, more consumers switched to cheaper private-label brands in the grocery category.

In addition to increased credit card balances, there’s been a pickup in mortgage-equity withdrawal, which is also supporting strong spending, according to Goldman Sachs Group Inc.’s chief economist Jan Hatzius.

Consumers’ reliance on leverage “supports spending in the short term but ultimately is not going to be a sustainable source of big increases in spending,” Hatzius said. “So it builds in a slowdown, sort of down the road.”