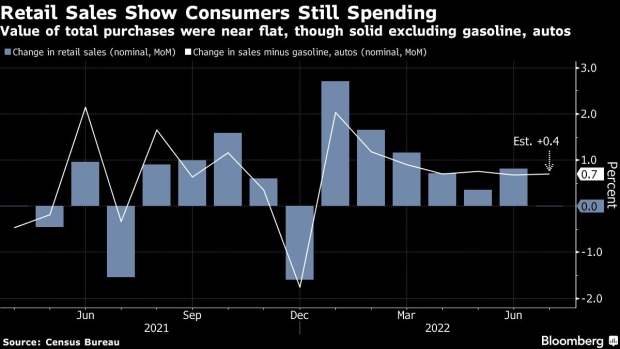 (Bloomberg) -- US consumers are standing firm in the face of hot inflation and rising interest rates -- even if they’re spending with a little less gusto and a lot more frustration.

Retail sales excluding a price-induced drop in gas station receipts and a drop in motor vehicle purchases rose a better-than-expected 0.7% in July, Commerce Department data showed Wednesday. Building-materials outlets, electronics and appliances stores and online merchants were among those with firm gains in receipts before adjusting for inflation.

Walmart Inc. and Target Corp. are preparing for a healthy shopping season this fall after absorbing painful price cuts on apparel, kitchen appliances and patio furniture as shoppers pulled back from a two-year spree. Customers are still reaching for their wallets, the retailers say, but now the focus is on essential goods as spending on trips and restaurants revives and inflation forces shoppers to pay more for basic items.

“The most important takeaway is that consumer spending on goods is continuing to increase, even as the bulk of their energies have shifted to services,” said Stephen Stanley, chief economist at Amherst Pierpont Securities.

With China’s economy slowing down, Europe likely heading into a recession amid skyrocketing energy prices, the resilience of the American consumer so far is all the more remarkable.

It also suggests the Federal Reserve has more work to do in tempering demand as it tries to get better control of inflation that’s near a 40-year high.

The total value of US retail sales last month, unadjusted for changes in prices, was essentially flat. However, economists at Wells Fargo & Co. estimate the inflation-adjusted change was actually up 0.6%.

Economists have long expected consumers to shift back to pre-pandemic shopping patterns, which lean more toward services like entertainment and travel, and away from the merchandise-heavy tilt of the past two years. But the highest inflation in a generation is eroding workers’ paychecks and forcing many to lean on credit cards and savings to keep spending.

The retail sales data are more of a report card on consumer demand for merchandise. A fuller picture, including outlays on services, will emerge later this month with the government’s release of income and spending figures.

For some, the inflation pinch has meant more consumers are seeking out store-brand products or, as Walmart said, trading higher-end deli meats for hot dogs and canned tuna. The retail giant, known for its everyday low prices and budget-conscious customers, said it’s now seeing more visits from higher-income families.

The government’s retail data also hinted at this shift. Sales at department stores and clothing shops declined, and while grocery-store receipts increased, food-at-home sales likely dropped as well after adjusting for inflation. Outlays at restaurants and bars, though up slightly, were the weakest since a decline in January.

From an economic growth standpoint, so-called “control group” sales -- a category used to help calculate gross domestic product and which excludes food services, auto dealers, building materials stores and gasoline stations -- were up a stronger-than-forecast 0.8%, matching the best gain since the start of the year.

Home Depot Inc. reiterated its financial outlook, saying project backlogs remain healthy and strong sales trends have continued into the current quarter. Lowe’s Cos. said its operating income and per-share earnings for the year will be toward the top of its previous forecast, adding that sales trends since July 4 have been healthy.

At the same time, there are some signs of weakness at companies catering to consumers. Giants such as Kraft Heinz Co., Clorox Co. and Slim Jim maker Conagra Brands Inc. are increasingly reliant on price increases to shore up sales while unit volumes fall.

Shoppers are hanging in there for now, and the biggest retailers in the business are betting on continued resilience. But spending patterns changed more quickly than the companies expected earlier this year, saddling them with costly inventory woes. And there’s always a risk that they’ll be surprised again by their customers.

“The staying power of consumers has been quite robust, but it’s showing signs of running out,” wrote Wells Fargo’s Tim Quinlan and Shannon Seery following the report. “How these factors evolve from here will determine the trajectory for spending, and thereby the overall economy.”