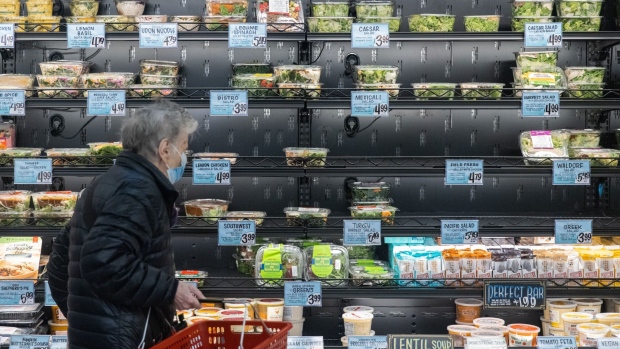 A customer shops in the prepared food section of the Trader Joe's Upper East Side Bridgemarket grocery store in New York, U.S., on Thursday, Dec. 2, 2021. The century-old vaulted market under the Queensboro Bridge has reopened on Thursday as a Trader Joe's. , Bloomberg

(Bloomberg) -- A key gauge of US consumer prices posted the second-smallest increase this year while spending accelerated, offering hope that the Federal Reserve’s interest-rate hikes are cooling inflation without sparking a recession.

The personal consumption expenditures price index excluding food and energy, which Fed Chair Jerome Powell stressed this week is a more accurate measure of where inflation is heading, rose a below-forecast 0.2% in October from a month earlier, Commerce Department data showed Thursday.

From a year earlier, the gauge was up 5%, a step down from an upwardly revised 5.2% gain in September.

The overall PCE price index increased 0.3% for a third month and was up 6% from a year ago, still well above the central bank’s 2% goal.

Personal spending, adjusted for changes in prices, rose 0.5% in October, the most since the start of the year and largely reflecting a surge in outlays for merchandise.

Similar to consumer price index data last month, the report shows that while inflation is beginning to ease, it remains much too high. While a deceleration is certainly welcomed, Powell emphasized Wednesday that the US is far from price stability and that it will take “substantially more evidence” to provide comfort that inflation is actually declining.

Policymakers are expected to continue raising interest rates into next year, albeit at a slower pace, and remain restrictive for some time.

The median estimates in a Bloomberg survey of economists were for a 0.3% monthly increase in the core PCE price index and a 0.4% advance in the overall measure. The S&P 500 rose, the dollar fell and 10-year Treasury yields fluctuated.

“The larger-than-expected deceleration in PCE prices in October adds to the case for a more gradual pace of rate hikes at coming FOMC meetings. That said, there was strength elsewhere: Consumer spending started the fourth quarter at a robust clip, gains in wage income stayed solid, and it’s possible that state distributions of refundable tax credits -- which boosted incomes -- won’t just be a one-off.”

It’s unclear, however, whether consumers will be able to maintain that momentum in 2023.

With inflation still outrunning pay gains, many households are leaning on savings, stimulus checks from some state governments, and credit cards to keep spending. And there’s growing concern that restrictive monetary policy will tip the US economy into recession.

The saving rate fell to 2.3% in October, the lowest since 2005, the Commerce Department report showed.

Inflation-adjusted disposable income climbed 0.4%, the most in three months. Wages and salaries, unadjusted for prices, increased 0.5%. The report also noted that the one-time payments issued by states bolstered incomes in October.

Sustained wage gains, particularly in service sectors, could keep inflation persistently higher than the Fed’s goal for an extended period, underscoring the importance of the labor market to the Fed’s decision-making in the months ahead.

Core services inflation that excludes housing and energy, a gauge Powell said Wednesday “may be the most important category for understanding the future evolution of core inflation,” moderated in October from the prior month.

Data out Friday are anticipated to show employers added another 200,000 payrolls in November, while the unemployment rate held at a historically-low level of 3.7%.

--With assistance from Matthew Boesler and Kristy Scheuble.