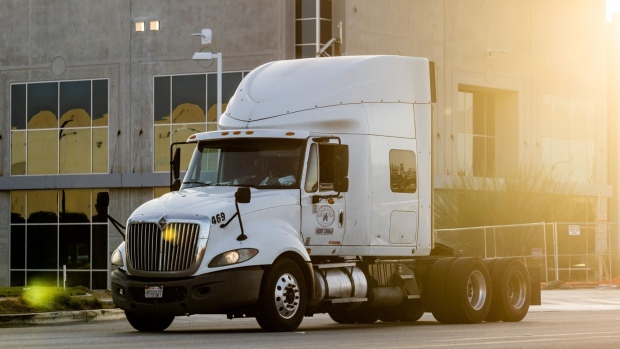 A truck drives outside a warehouse in Redlands, California, U.S., on Sunday, Nov. 7, 2021. Fallout from the global supply-chain crisis is clogging U.S. ports, pushing warehouses to capacity and forcing logistics managers to scramble for space. , Bloomberg

(Bloomberg) -- A US Supreme Court decision that could force California’s 70,000 truck owner-operators to stop driving is set to create another choke point in already-stressed West Coast logistics networks, a truckers’ organization said.

“Gasoline has been poured on the fire that is our ongoing supply-chain crisis,” the California Trucking Association said in a statement following the Supreme Court’s decision to deny a judicial review of a decision of a lower court, a process known as certiorari.

“In addition to the direct impact on California’s 70,000 owner-operators who have seven days to cease long-standing independent businesses, the impact of taking tens of thousands of truck drivers off the road will have devastating repercussions on an already fragile supply chain, increasing costs and worsening runaway inflation,” the CTA said.

The association asked the Supreme Court for a review of a case challenging California’s Assembly Bill 5, a law that sets out three tests to determine whether a worker is an employee entitled to job benefits or an independent contractor who isn’t. The trucking industry relies on contractors, and has fought to be exempt from state regulations for years because of federal law.

With few exceptions, the relationship between independent truckers and their carriers, brokers and shippers will be governed by the tests.

“We are disappointed the court does not recognize the irrevocable damage eliminating independent truckers will have on interstate commerce and communities across the state,” the association said.

“This will have a profound effect on driver supply, at least here in the interim,” he said in an interview on Bloomberg Television Friday, adding that many entrepreneurs use the contract model as pathway for opportunities in trucking. “We’ve got many companies who have been planning for this, but we’ll see how the chips fall.”