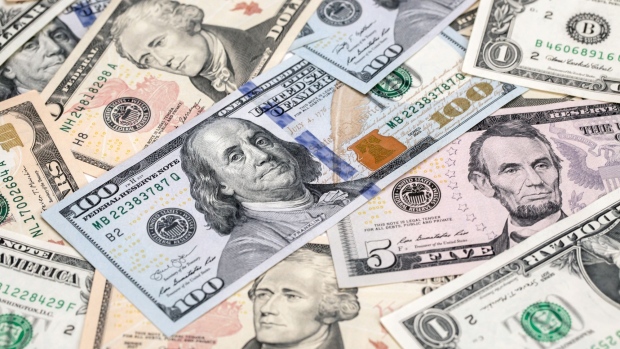 U.S. one-hundred dollar, ten-dollar, five-dollar and one-dollar banknotes are arranged for a photograph in Hong Kong, China, on Thursday, April 23, 2020. The Hong Kong Monetary Authority intervened for a third straight day this week to defend its currency peg as the local dollar touched the strong end of its trading band. Photographer: Paul Yeung/Bloomberg , Bloomberg

(Bloomberg) -- Cost-cutting measures at firms from Meta and Google parent Alphabet, to Gap and FedEx demonstrate how persistent inflation continues to force US businesses to make tough decisions to navigate uncertainties around the pace and severity of a global economic slowdown. With a hawkish Fed signaling more rate hikes to come after its third straight 75 basis-point increase, company executives are walking a delicate line between managing pricing, cutting jobs and investing for growth -- all without sacrificing margins, something that BlackRock is concerned will inevitably surface in the form of guidance cuts, saying the “tone of management teams” has begun to sour.

Tuesday: Cracker Barrel (CBRL US) is due before market. The restaurant chain, whose locations are dependent on highway traffic, may see same-store sales growth slow to a gain in the single-digit range after five quarters of double-digit expansion. Price increases, virtual brand and catering sales growth may have been partly offset by weak travel due to high gas prices and soft spending by senior customers, Bloomberg Intelligence said. Retail sales likely haven’t fared well either due to tough y/y comparisons, consensus estimates show. BI continues to expect the chain to underperform peers because of its older clientele and weaker to-go business.

Wednesday: Vail Resorts (MTN US) will report fourth-quarter earnings after the bell. A limit on ski lift tickets announced by the resort operator last month may sway non-committal skiers into purchasing a pass sooner, potentially boosting and locking in reported ski pass sales, Barclays analysts said at the time. Managing overcrowding could also help improve guest experience during peak ski season, especially if the company again suffers staff shortages as it saw last season. Investors may pay attention to how the capacity constraints will affect revenue and Ebitda as the company is likely to give its first forecasts for fiscal 2023.

Thursday: Nike (NKE US) will release its first-quarter results after the market close. Its Chinese operations will be an area of focus as loosened Covid-19 restrictions and Beijing’s new policies to lift the economy put Nike on track to beat consensus expectations for fiscal 2023, Bloomberg Intelligence said. While consumer spending is expected to recover in China over the next 15 months, sales are likely to remain constrained in September and October due to lockdowns this month and lingering concerns about the virus going into next month’s holidays. Nike could also face hurdles expanding market share in the country, which accounts for about 13% of its revenue, as Chinese shoppers shift to local labels like Anta and Li Ning.