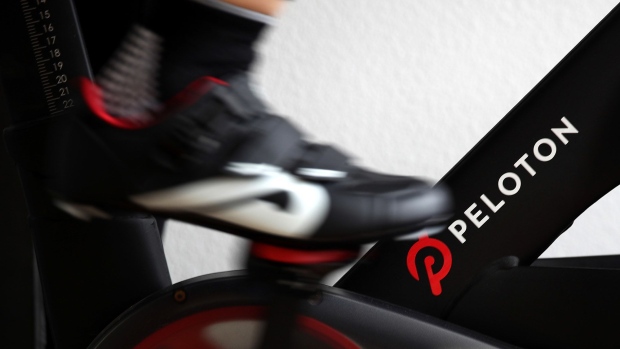 SAN ANSELMO, CALIFORNIA - APRIL 06: Cari Gundee rides her Peloton exercise bike at her home on April 06, 2020 in San Anselmo, California. More people are turning to Peloton due to shelter-in-place orders because of the coronavirus (COVID-19). Peloton stock has continued to rise over recent weeks even as most of the stock market has plummeted. However, Peloton announced today that they will temporarily pause all live classes until the end of April because an employee tested positive for COVID-19. (Photo by Ezra Shaw/Getty Images) , Photographer: Ezra Shaw/Getty Images North America

(Bloomberg) -- Better-than-expected US retail sales data and upbeat outlooks from Walmart and Target this week demonstrated the resilience of the American consumer amid hyperinflation and rising rates. Yet evolving shopping behaviors across the income spectrum, along with price markdowns from excess inventory, are contributing to the highest proportion of earnings misses for the consumer discretionary sector than elsewhere in the S&P 500 this season. Reports next week will give investors further insight into the second-half for retailers, chipmakers and software providers as the peak earnings period draws to a close.

Monday: Zoom Video (ZM US) will report after-market. The video conferencing provider is likely to see y/y revenue growth drop into the single digits for the first time since it went public, based on the company’s own forecast and consensus estimates, as a weakening economy and broader return-to-office trends cut into sales. Efforts to drive further gains in the post-Covid era, such as boosting enterprise sales and new offerings like Phone and WhiteBoard, may not be enough to sustain growth due to rising competition from Microsoft Teams and slowing IT budgets at smaller business clients, according to Citi analysts who downgraded its shares to sell this week.

Tuesday: Dick’s Sporting Goods (DKS US) will report before market opens. Investors will look for signals on whether the largest US sports equipment and apparel retailer can maintain its pandemic-era gains as consumers shift spending to essentials amid rising prices. Cowen analysts see an opportunity for management to raise the low end of its full-year adjusted EPS outlook after they gave a wide forecast range last quarter. Fears of financial risk are emerging on the credit front as its bonds have recently traded at a wider spread than other higher-grade peers, which Bloomberg Intelligence says may put its investment-grade status in jeopardy if expectations of margin pressure stemming from its product suppliers materialize.

Wednesday: Salesforce (CRM US) reports after the closing bell. The second-quarter current remaining performance obligations growth — a closely watched indicator of near-term demand — may top the consensus estimate of 18%, Bloomberg Intelligence says, thanks to steady cloud spending. Yet, even as enterprise IT spending holds up well, macroeconomic uncertainty could slow gains in the marketing and commerce software segment, which is projected to post the slowest year-on-year revenue growth in at least seven years.

Thursday: Peloton (PTON US) is due before the bell. The fitness company has in past weeks taken drastic steps to trim costs, ranging from job cuts to price hikes to store closures, as well as suspending in-house production of its bikes and redesigning them for self-assembly. Analysts including Bloomberg Intelligence will now turn their attention to the fourth-quarter results, in addition to management’s free cash flow guidance. Consensus estimates are projecting a 27% year-on-year contraction in revenue -- the steepest since Peloton shares began trading -- and the slowest sequential growth in Connected Fitness subscribers, anticipating a mere 22,000 additions from the prior quarter.