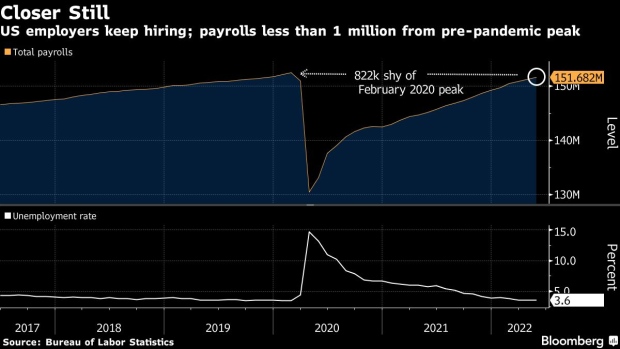 (Bloomberg) -- Until recently, determining the cadence of the US economy and job market was relatively straight-forward as the nation transitioned to the pandemic recovery. Now the task for economists has given way to growing uncertainty as inflation sits at a four-decade high, borrowing costs climb and the backbeat of recession grows louder.

“There’s a lot of ambiguity right now in the economy and it’s hard to understand and parse what’s going on -- never mind trying to understand what’s going to happen over the next few months,” said Nick Bunker, economic research director at jobs website Indeed Inc.

Economists don’t tend to look at any given indicator in a vacuum. Instead they consider a wide variety of data when making projections about the health of the economy. Even so, here are a few popular indicators -- and how one can view sustained downward movements in each through a glass half-full or half-empty perspective:

The number of job openings in the US has become a closely watched measure and has been cited by Federal Reserve officials including Chair Jerome Powell as a signal of labor market tightness. The meteoric rise in vacancies has been emblematic of businesses’ struggles to attract and retain employees.

Openings remain near a record high, but a sustained pullback could be viewed two different ways. On one hand, fewer openings could signal greater success filling positions. With nearly two openings per unemployed worker, a further decline in vacancies could indicate tightness in the labor market is easing. It could also reflect a more grim reality: employers taking down listings, a sign of cooling demand.

Retail sales used to be very straight forward. The report, which includes how much Americans spend at a range of merchants and restaurants each month, has become much more difficult to interpret amid shifting consumer preferences. Furthermore, the number is not adjusted for inflation, which adds to difficulties in determining how strong consumer demand is.

A slowing or outright decline in retail sales may just mean Americans are spending more of their income on services -- a trend economists have long been expecting. Or it could mean a more concerning slowdown in personal consumption, the main driver of the US economy.

Nonfarm payrolls have been growing by hundreds of thousands each month nearly every month since May 2020. The pace of growth, while still extremely robust at nearly 400,000 last month, has begun to moderate.

An optimist on the economy would likely chalk up the slowdown to the shrunken size of the US labor pool -- the classic definition of a tight job market. The unemployment rate is hovering at 3.6%, just shy of a five-decade low. That means labor demand, while still extremely hot, will be limited by the number of workers an employer can find to actually fill the jobs.

A slowdown in payroll growth can also show that employers are hiring less because they are experiencing or anticipating a slowdown in demand. It can also reflect more layoffs.

Meantime, the upward movement in other indicators can also be viewed through both a positive and negative lens.

Inventories, which have been the subject of much debate recently after Target Corp. cut its profit outlook in part due to bloated stockpiles, are similar.

Inventory growth can mean businesses, if they are confident demand will stay firm, are stocking up to counter disruptions in supply chains. Higher levels of unsold goods can also indicate demand is starting to weaken.