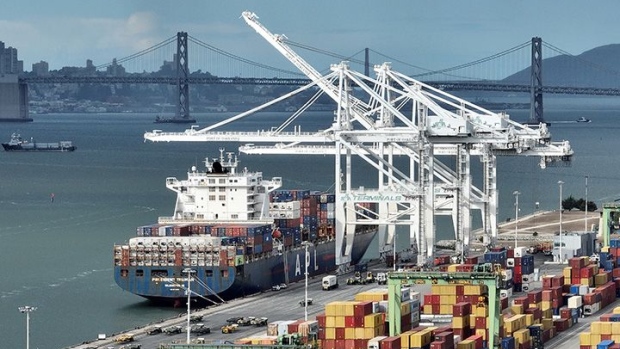 (Bloomberg) -- The government’s primary measures of US third-quarter economic activity painted a mixed picture of the economy’s momentum after a lackluster first half of the year.

Inflation-adjusted gross domestic product, or the total value of all goods and services produced in the economy, increased at a 2.9% annualized rate during the period, Commerce Department data showed Wednesday. That reflected upward revisions to consumer and business spending, and compares with a previously reported 2.6% advance.

Meanwhile, another key official gauge of activity -- known as gross domestic income -- rose at a 0.3% rate in the third quarter after falling 0.8% in the prior period. It’s a measure of the income generated and costs incurred from producing those goods and services.

The average of the two figures, a gauge the National Bureau of Economic Research’s Business Cycle Dating Committee uses when making any recession call, increased 1.6% after falling in the first half of the year.

For Federal Reserve policy makers raising interest rates at the fastest pace in a generation, the overall growth picture is one they want to see: in line with or slightly below the economy’s long-term trend, perhaps enough to slow inflation but not yet signaling a recession.

The underlying picture of growth proved similar to the preliminary release. While the details showed resilient consumer spending and business investment, the biggest contributor to GDP was the volatile net exports category. Government spending also rose.

Stripping out the trade and inventories components, a key gauge of underlying demand known as inflation-adjusted final sales to domestic purchasers increased just 0.9% in the third quarter.

The GDP data showed personal consumption, the biggest part of the economy, climbed at a 1.7% pace, a slowdown from the prior quarter but up from the previously reported 1.4% increase. Services spending increased, while outlays on goods fell for a third quarter.

Looking ahead, household spending is set to drive growth in the fourth quarter. Prior to the release, the Federal Reserve Bank of Atlanta’s GDPNow model estimate for economic growth in the final three months of the year was 4.3%. Inflation-adjusted spending data for October will be released Thursday.

After-tax profits as a share of gross value added for non-financial corporations, a measure of aggregate profit margins, shrank in the third quarter to 14.9% from 16.2% in the second quarter.

Across the economy, adjusted pretax corporate profits decreased 1.1% last quarter, marking the first decline since 2020, and were up 4.4% from a year earlier.

This year many companies have successfully passed along higher costs of labor and materials as they try to protect or even expand their profit margins. But some companies have recently indicated a hesitation to pursue further aggressive price hikes amid the uncertain economic environment.

--With assistance from Matthew Boesler and Jordan Yadoo.