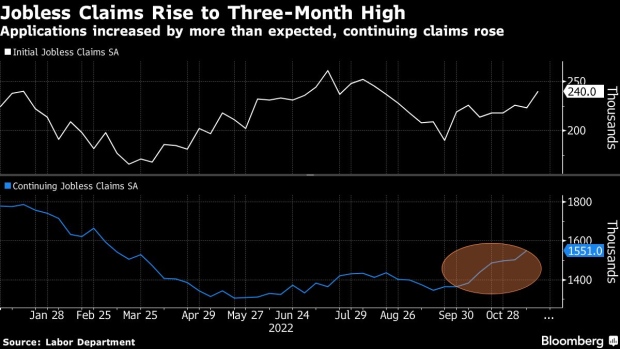 A student during a Welding Production Worker training program class at the Detroit Training Center in Detroit, Michigan, US, on Tuesday, July 5, 2022. The Department of Labor is scheduled to release initial jobless claims on July 7. , Bloomberg

(Bloomberg) -- Fresh evidence Wednesday pointed to a slowing US economy and a cooling labor market that suggests steep interest-rate hikes by the Federal Reserve are starting to have a broader impact.

Business activity contracted for a fifth month in November and applications for unemployment benefits rose last week to a three-month high. While consumer sentiment and new-home sales improved, both remain depressed and indicate a weaker spending appetite and subdued housing demand.

At the same time, a separate report showed a solid rebound in capital goods orders and shipments that will help feed through into what’s projected to be firm fourth-quarter growth.

“We see signs of cooling in the labor market, and business surveys generally have pointed to weakening momentum for the economy,” Daniel Silver, economist at JPMorgan Chase & Co., said in a note. “But GDP source data have been surprising to the upside in recent weeks.”

The Fed’s most aggressive monetary tightening campaign since the 1980s has so far had a fairly limited effect on demand overall, but Wednesday’s data show early signs that some of the more resilient parts of the economy are starting to soften.

That could persuade some policymakers that it’s not only appropriate to soon slow the pace of tightening, but also add a wrinkle to the debate as to how high interest rates will go -- minutes of the Fed’s policy meeting earlier this month may shed light on that when released later Wednesday.

The labor market has so far proved resilient to the effects of higher interest rates, underscored by historically low unemployment. But the number of unemployed who have received benefits for a week or more jumped to the highest level since March, supporting many economists’ expectations that joblessness will rise in the coming year.

Americans are starting to feel the same way. Unemployment expectations are at the worst level since 2011, according to the final November reading of University of Michigan’s consumer survey.

“If expectations over labor markets continue to deteriorate, consumer demand is likely to follow, particularly as consumers draw down their savings and express reluctance to borrow under rising costs of credit,” Joanne Hsu, director of the survey, said in a statement.

Businesses are showing continued signs of slowing momentum. S&P Global’s measure of activity dropped to the second-lowest level since the immediate aftermath of the pandemic.

That’s at odds with a Commerce Department report that showed orders for business equipment rebounded sharply last month. Shipments of so-called core capital goods, a proxy for business investment in the GDP report, climbed by the most since the start of the year.

When taken with October retail sales, which advanced by the most in eight months, that still bodes well for economic growth for now. But the cumulative effects of rising interest rates are expected to weigh on future investment.

“The growth trajectory for the fourth quarter is slowing but not contracting,” Jeffrey Roach, chief economist for LPL Financial, said in a note. “However, the slowdown in global economic activity increases the risk of recession in 2023 but as of today, the economy is not in recession.”

The housing market, however, is in recession. Even though new-home sales unexpectedly rose last month, the data is extremely volatile and the increase was driven primarily by the South. Otherwise, the market has been deteriorating all year due to a steep run-up in mortgage rates, which have retreated somewhat in recent weeks.

“We expect sales to remain under pressure going forward as the erosion in affordability this year keeps many buyers on the sidelines,” Nancy Vanden Houten and Ryan Sweet of Oxford Economics said in a note. “However, the more recent decline in mortgage rates, if sustained, will boost affordability at the margin.”

--With assistance from Reade Pickert and Augusta Saraiva.