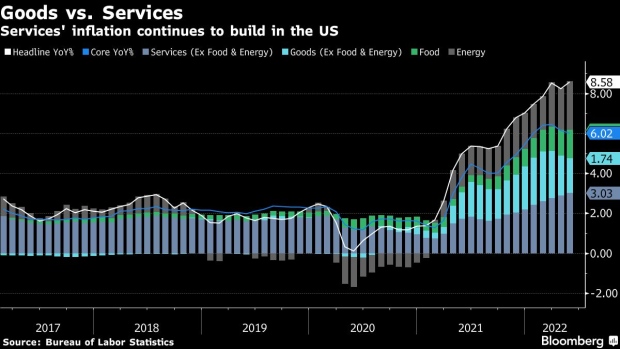 Kristalina Georgieva, managing director of the International Monetary Fund (IMF), speaks at a news conference during the annual meetings of the IMF and World Bank Group in Washington, D.C., U.S., on Thursday, Oct. 17, 2019. The IMF made a fifth-straight cut to its 2019 global growth forecast, citing a broad deceleration across the world's largest economies as trade tensions undermine the expansion. , Bloomberg

(Bloomberg) -- The US economy is likely to slow in 2022 and 2023 but will “narrowly avoid a recession” as the Federal Reserve implements its rate-tightening plan to curb inflation, the International Monetary Fund said.

“The policy priority now must be to expeditiously slow wage and price growth without precipitating a recession” the IMF said in a statement Friday. “This will be a tricky task,” as global supply constraints and domestic labor shortages are likely to persist, and the war in Ukraine creates additional uncertainties, it said.

The Fed’s plan of quickly getting its benchmark rate to 3.5% to 4% “should create an upfront tightening of financial conditions which will quickly bring inflation back to target,” Managing Director Kristalina Georgieva said in separate comments following the article IV consultations, the IMF’s assessment of countries’ economic and financial developments following meetings with lawmakers and public officials.

Based on the policy path outlined at the June Federal Open Market Committee meeting, and an expected reduction in the fiscal deficit, the IMF expects the US economy will slow, Georgieva said. The fund has “also just concluded a very useful set of discussions” with Treasury Secretary Janet Yellen and Fed Chair Jerome Powell, she said.

“We are conscious that there is a narrowing path to avoiding a recession in the US,” Georgieva said. “We also have to recognize the uncertainty of the current situation.”

Policy makers raised interest rates by 75 basis points last week -- the single-biggest move since 1994 -- and Powell signaled that another increase either of the same magnitude or of 50 basis points was on the table for July.

The Fed chief and his colleagues have pivoted aggressively to fight the hottest inflation in 40 years amid criticism that they left monetary policy too easy for too long as the economy recovered from Covid-19. They’ve raised rates by 1.5 percentage points this year and officials forecast about 1.75 points of further cumulative tightening in 2022.

Since Russia’s invasion of Ukraine in February, global oil prices have risen dramatically, exacerbating inflation that had been stoked by pandemic-related supply-chain disruptions and, especially in the US, the fiscal response to Covid-19.

Noting that American price pressures are now broad-based and go well beyond increases in energy and food prices, Georgieva said Yellen and Powell “left no doubt” as to their commitment to bring inflation back down.

The failure to obtain broader support among legislators for the package “represents a missed opportunity,” Georgieva said.

“The administration should continue making the case for changes to tax, spending, and immigration policy that would help create jobs, increase supply and support the poor,” she said.