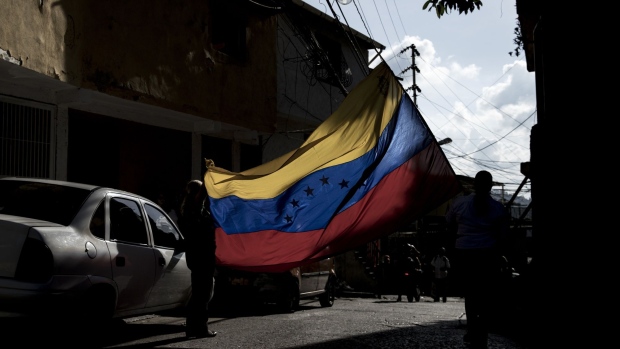 Attendees wave a Venezuelan flag during a rally with Juan Guaido, president of the National Assembly who swore himself in as the leader of Venezuela, not pictured, in the El Hatillo neighborhood of Caracas, Venezuela, on Saturday, Sept. 14, 2019. Earlier this month, Venezuela's Public Prosecutor Tarek William Saab started an investigation against Guaido for "treason," after alleging that he negotiated the Essequibo disputed territory with the U.K. Photographer: Fabiola Ferrero/Bloomberg , Bloomberg

(Bloomberg) -- A US delegation was unable to secure the release of Matthew Heath, a former US Marine detained in Venezuela, following a four-day trip to the Latin American country, Heath’s family said in a statement.

Discussing the welfare and safety of US nationals was the top priority for the delegation, led by Ambassador for Venezuela James Story and Special Presidential Envoy for Hostage Affairs Roger Carstens, who arrived Monday and left Thursday. There are at least seven American citizens held in Venezuelan prisons and Heath’s case is of special concern due to his delicate health situation.

“We believe that Matthew’s physical and mental health both continue to be at risk,” said Heath’s family in a statement, signed by his aunt Trudy Rutherford. “It is important that there be continued, high level engagement between the US government centered around bringing Matthew and the other American detainees home.”

Members of the US delegation met with Heath at a military hospital in Caracas during their trip, his lawyer Guillermo Heredia said. Heath’s condition is stable, he added. Carstens also visited on Wednesday with five of the six Citgo executives still imprisoned in Venezuela’s political police headquarters to check up on their health, according to Diego Barboza, one of their lawyers.