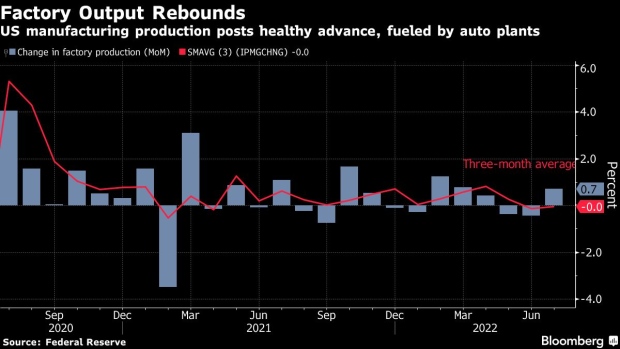 Boxes for cast iron cookware at the Lodge Manufacturing Co. factory in South Pittsburg, Tennessee, U.S., on Monday, March 7, 2022. Production at U.S. factories rose modestly in January, suggesting manufacturers are gradually working through pandemic-related shortages of materials and labor that hobbled output in the prior month. Photographer: Luke Sharrett/Bloomberg , Bloomberg

(Bloomberg) -- Production at US factories increased in July for the first time in three months, propelled by a pickup in motor vehicle output that masked more mixed results in other categories.

The median forecast in a Bloomberg survey of economists called for 0.3% increases in both factory output and total industrial production.

Despite firming last month, manufacturing has moderated and risks losing more momentum as businesses contend with an inventory overhang and an easing in domestic demand for goods. Recent factory surveys have illustrated a pullback in orders, while weaker export markets amid a strong US dollar represent another headwind.

A New York Fed survey on Monday showed manufacturing in the state suffered its second-largest monthly decline on record as bookings and shipments plunged. Separate regional data and national figures over the next week will help shed more light on the extent of the industry’s pullback.

Tuesday’s industrial production report showed output of motor vehicles rose 6.6%, the most in four months. An easing of bottlenecks on semiconductor supplies is affording automakers more room to increase output.

Excluding autos, factory production increased 0.3% after falling in the prior two months. While the output of fabricated metals, wood products and aerospace equipment advanced in July, production of electrical equipment and appliances, primary metals and furniture declined.

Business equipment output rose 0.6%, the first increase in three months. Within production of consumer goods, a sharp rise in autos more than offset declines in home electronics, appliances and furniture.

The Fed’s report also showed capacity utilization at factories climbed to 79.8% from 79.3%.