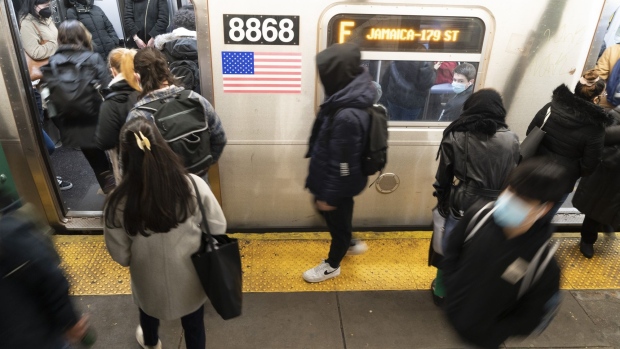 (Bloomberg) -- Hiring at US companies cooled in November to the slowest pace in nearly two years and wage gains moderated, suggesting employers may be starting to hit the brakes amid a darkening economic outlook.

Businesses’ payrolls rose 127,000 this month, the smallest gain since January 2021, according to data from ADP Research Institute in collaboration with Stanford Digital Economy Lab. The median forecast in a Bloomberg survey of economists called for a 200,000 advance.

“Turning points can be hard to capture in the labor market, but our data suggest that Federal Reserve tightening is having an impact on job creation and pay gains,” Nela Richardson, chief economist at ADP, said in a statement Wednesday. “In addition, companies are no longer in hyper-replacement mode. Fewer people are quitting and the post-pandemic recovery is stabilizing.”

The payrolls data point to a more significant slowing in the labor market, which has so far been largely stubborn to cave under aggressive interest-rate hikes by the Fed. Wage growth, while remaining strong, also continued to moderate across industries. While that’s disheartening for American workers, it’s a welcome development for policymakers in their crusade against decades-high inflation.

Payrolls rose the most in the leisure and hospitality sector, while manufacturing shed 100,000 positions.

Separate data released Wednesday painted a mixed picture of economic activity in the third quarter. US equity futures pared their gains as investors digested the reports and awaited for a speech by Fed Chair Jerome Powell later Wednesday.

Workers who stayed in their jobs experienced a 7.6% pay increase from a year ago, ADP show, marking the second monthly straight deceleration and suggesting workers’ bargaining power may be starting to erode. For those who changed jobs, the median increase in annual pay was 15.1%.

Other indicators are showing easing demand for workers. Several measures of wage gains have slowed or flattened out, and the number of Americans receiving continued unemployment benefits jumped to the highest level since March this month.

Job openings, while still elevated, have come down in recent months, and data for October will be released later Wednesday. November data for the government’s measure of nonfarm payrolls, along with the unemployment rate, are due Friday.

The ADP figures showed the Northeast added the most jobs. The Midwest posted declines.

After a hiatus earlier this year, ADP returned with its employment report a few months ago to include updated methodology and historical jobs data on a monthly and weekly basis for the last 12 years. The figures are based on payroll transactions of more than 25 million US workers.

--With assistance from Kristy Scheuble and Reade Pickert.