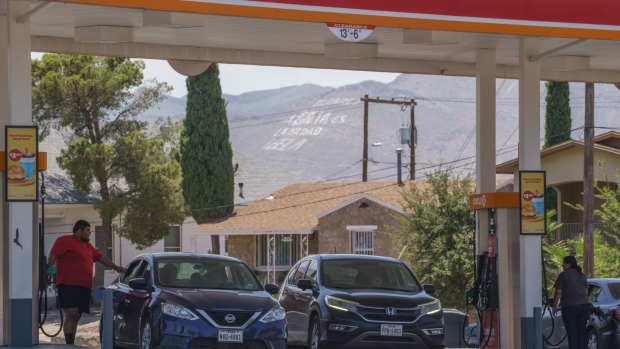 Customers refuel vehicles at a Circle K gas station near the US and Mexico border in El Paso, Texas, US, on Friday, July 22, 2022. , Bloomberg

(Bloomberg) -- US average retail gasoline prices fell below $4 a gallon to the lowest since early March, according to data from AAA.

Prices were at $3.99 in figures released Thursday, continuing an eight-week downward trend. Costs have fallen with cheaper oil and the slump in fuel demand, which is lower than last year by every measure.

On Wednesday, figures showed that the surge in the consumer price index decelerated last month, cooling from a 9% increase in June when fuel prices hit multiple record highs. Rampant inflation has been squeezing American households for months, and the steady run of declines at the gasoline pump is likely to ease some of that pressure.

The latest drop comes after average national pump prices hit a record $5.016 a gallon on June 13. Oil prices, the main driver of gasoline costs, have been in retreat as traders brace for recession and the US government released crude from its emergency reserves to enhance supplies.

New York gasoline futures, the basis of wholesale and retail prices, have gained almost 30 cents a gallon in the past week. The rise followed a similar uptick in oil futures and is in part driven by regional fuel-supply tightness in the New York Harbor area. This could stunt, stall or even reverse the recent decline in pump prices in the days and weeks ahead.

(Updates with futures price movement in the last paragraph)