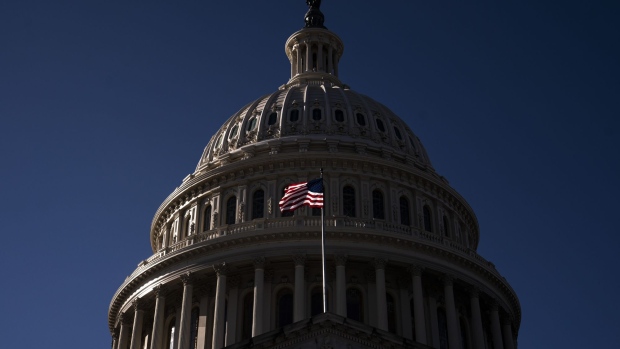 An American flag outside the US Capitol in Washington, DC, US, on Monday, Jan. 9, 2023. After a week of soaring tensions, late night negotiations and House floor drama equal to any on reality TV, Republicans are coming back to DC this week with a danger of running into another intraconference battle over the House rules package. Photographer: Nathan Howard/Bloomberg , Bloomberg

Public borrowings in the US and elsewhere have swelled because of overspending partly fueled by fractured politics, said former International Monetary Fund Chief Economist Raghuram Rajan.

“The size of the debt has gone up tremendously,” he told a panel at the World Economic Forum in Davos. “Part of the problem that’s going on is clearly there is a fractured political consensus in many industrial countries — I mean, that is part of the reason the US overspent. Every constituency got a share of the spending, simply because they couldn’t make choices.”

Rajan, a former governor of the Reserve Bank of India who is now a professor at Chicago University’s Booth School of Business, spoke at a time when a major Congressional battle is looming over the US borrowing ceiling. The federal debt limit of nearly $31.4 trillion is expected to be reached in a matter of months.

US fiscal support during the pandemic provides a good example of the problem, Rajan said.

“Forget targeted spending — it’s universal plus,” he said. “Banks, which should have suffered losses during the pandemic, didn’t suffer any losses. Why? Because you had the Paycheck Protection Program, which went to the small and medium firms correctly, but then it went out directly through the back door to the banks to repay the loans.”

Such a scattergun approach to fiscal aid is the real issue, Rajan added. He spoke on a panel on fiscal expansion chaired by Bloomberg’s Stephanie Flanders.

“In some sense we’ve bailed out everybody, right, and that is the problem,” he said. “Spending today is highly untargeted.”

--With assistance from James Regan.