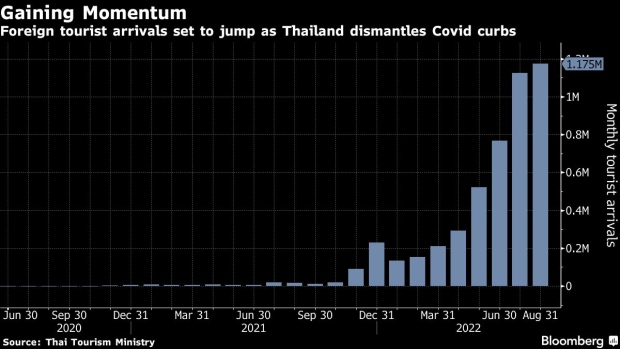 (Bloomberg) -- US hotel operator Standard International is betting on Thailand’s post-pandemic tourism recovery to power an expansion in Asia that will see it open properties in popular and less-explored destinations, its chairman said.

The company, majority-owned by Thai developer Sansiri Pcl, will open boutique hotels under its flagship brand “The Standard” in the seaside resort town of Pattaya and popular tourist island Phuket by 2025, according to Chairman Srettha Thavisin. It also aims to manage as many as five properties under the community-oriented Bunkhouse brand for the first time in Asia in smaller towns such as Chiang Mai.

“Tourism will remain the key driving force of the Thai economy, especially in the next year or two with the weak baht and open borders,” said Srettha, who is also the chief executive of Sansiri, which holds a 62% stake in the hotel group. “From our strong base here, we can move quickly to seek out deals and expand.”

The expansion plan follows the opening of The Standard in Bangkok’s iconic Mahanakhon tower in July. Central Plaza Hotel Pcl and Minor International Pcl are among hotel operators boosting investments to cash in on the tourism revival.

The company plans to open more of its branded hotels in Singapore and Melbourne next year, with eight more lined up for Europe and North America, taking the worldwide tally of properties under its management to at least 20 by 2026.

Thailand has seen a rush of tourists in recent months after the nation scrapped all travel restrictions in July. It expects arrivals to reach about 10 million this year -- still a far cry from the record 40 million in the year before the pandemic.

While a full tourism recovery will take time, Thailand should focus on getting visitors to stay longer and spend more per trip, Srettha said. To achieve this, Thai authorities will need to promote smaller towns and offer diverse experiences in addition to mainstream city and beach scenes.

“Big cities will never fail to attract tourists, but we can develop secondary cities that are also interesting to foreigners in the medium to long-term too,” Srettha said. “If tourists enjoy local culture, food and drinks, and nature, they will stay longer. That will generate more income and more income distribution.”