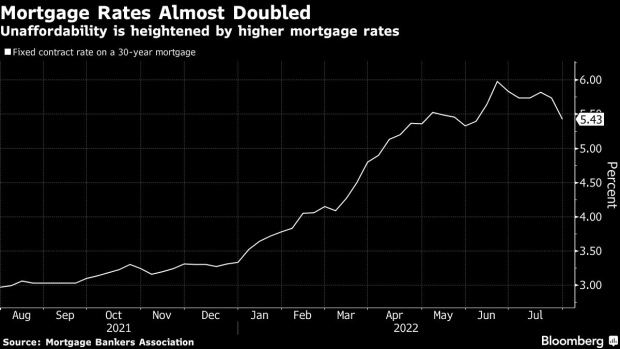 Houses in the Harris Ranch community of Boise, Idaho, US, on Friday, July 1, 2022. The housing market slowdown is having ripple effects across the industry and mortgage lenders are forecasting a slump in business. Photographer: Jeremy Erickson/Bloomberg , Bloomberg

(Bloomberg) -- Consumers have become the most pessimistic about housing since 2011, when home prices bottomed in the wake of the global financial crisis, data from Federal National Mortgage Association shows.

Fannie Mae’s Home Purchase Sentiment Index dropped to the lowest level in over a decade, as consumers expressed pessimism about home buying prospects. The index, which reflects consumers’ views on the housing market, has fallen from roughly 76 to 63 year-over-year, according to a release Monday.

Sentiment hasn’t been as bad since the post-crisis era, when home values plunged as borrowers struggled to make payments, leaving millions facing foreclosure.

But this time, the concern is different: this is an affordability crisis. As the Federal Reserve raises benchmark borrowing costs, rates on a 30-year fixed-rate mortgages have almost doubled year-over-year, standing at 5.43% in late July compared to 2.97% a year earlier, putting home ownership out of reach for more and more Americans. Sales of new US homes fell to a more than two-year low in June.

“The HPSI has declined steadily for much of the year, as higher mortgage rates continue to take a toll on housing affordability,” Doug Duncan, Fannie Mae senior vice president and chief economist, said in a statement. “Unfavorable mortgage rates have been increasingly cited by consumers as a top reason behind the growing perception that it’s a bad time to buy, as well as sell, a home.”

Read more: Housing-Affordability Crisis in US Increases Odds of Recession (1)

Four of the index’s six components dropped month-over-month, including views on buying and selling conditions, home-price outlook and job-loss concerns, said Fannie Mae. Consumers were most concerned about buying conditions, as the sentiment changed the most year-over-year with 76% of respondents saying it’s a bad time to buy.

And although home price appreciation has been the story of the year, consumers are starting to say that the trend is over. Respondents who believe home prices will go up in the next 12 months fell to 39% in July from 44% in June, while the percentage who said home prices will go down increased to 30% from 27%.

With home price growth slowing, and projected to slow further, Duncan expects a mixed reaction from consumers. “Some homeowners may opt to list their homes sooner to take advantage of perceived high prices, while some potential homebuyers may choose to postpone their purchase decision believing that home prices may drop,” he said.

The index gets the information about consumers’ home purchase sentiment from Fannie Mae’s National Housing Survey.