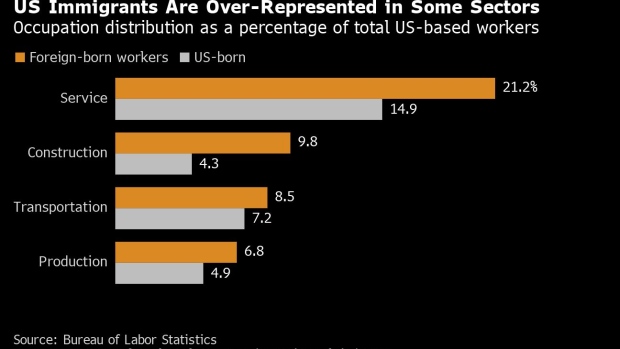 (Bloomberg) -- Immigration to the US is rebounding after a sharp two-year slowdown, but the pickup is unlikely to plug the pandemic-induced gap in new arrivals amid persistent employee shortages in industries reliant on foreigners.

Nearly a year after the US reopened its borders, non-American workers are flowing in at a pace just under that last seen in 2019, an analysis by University of California at Davis economics professor Giovanni Peri showed.

But as of June, there were about 1.7 million fewer working-age immigrants living in the US than there would have been if immigration had continued at its pre-2020 pace, he said. About 600,000 of those are college-educated.

“Unless we put more resources into processing this or we expand the number of visas, I don’t think we’re going to catch up,” said Peri. “We’re going to continue to grow, but not make up for this gap that we lost during Covid.”

The once-in-a-generation labor deficit has seen US employers struggle to hire and keep employees over the past two years, with those in construction, hospitality, and services -- which all historically rely on a greater proportion of immigrants -- feeling more pain. The shortage of both US-born and foreign workers has also triggered higher wages across industries, adding more fuel to the hottest inflation seen in about four decades.

While most of the growth in immigration to the US over the past decade is from legal migration, according to Peri, the country is grappling with the contentious issue of arrivals of thousands of undocumented people along its southern border.

Texas Governor Greg Abbott has focused his campaign for re-election next month on border security and immigration, vowing to curb unauthorized migrant crossings. The Republican spearheaded an operation to transport migrants from Texas border towns to New York, Washington and Chicago that has delivered more than 10,000 people since April.

The Federal Reserve is raising interest rates aggressively to help lower spending on goods and services and reduce demand for workers, which could in turn soften wage growth.

Hiring needs are moderating as a result of the tighter policy, but remain far above the supply of available workers. The number of US job openings dropped in August to 10.1 million but is still high, resulting in about 1.7 positions for every unemployed person, Labor Department data showed.

If not addressed, the immigration and staffing shortfall could lead to reduced business investment and slower US growth, said Pia Orrenius, a senior economist with the Federal Reserve Bank of Dallas.

“If businesses can’t hire, they’re not going to invest in new expansion of their operations because they can’t even staff their existing operations,” said Orrenius.

Fed Chair Jerome Powell has described the US labor market as being “clearly out of balance,” with demand exceeding the supply of workers. Other Fed officials say the immigration deficit is making that labor shortage worse.

Immigration to the US began to drop in 2017 after a slew of restrictions were enacted under former President Donald Trump. The influx of foreign workers plunged further in 2020 and 2021 after the pandemic shut borders and travel across countries came to a standstill.

In contrast, openings increased at a below-average pace for industries that had smaller shares of foreign workers, including finance, public administration and mining, they said.

“We are really dependent on a foreign-born workforce for a lot of parts of the economy,” said Tara Watson, an economist with the Brookings Institution.

Late last year, the US reopened its borders and started processing more applications for work visas and green cards. About 858,000 workers and their family members were admitted to the US on temporary visas from January through March of this year, according to a Pew Research Center analysis of data from the Office of Immigration Statistics.

That is up from a low of 226,000 reached in April through June of 2020, and only slightly below the roughly 1 million people who arrived each quarter on average in the four years before the start of the pandemic, Pew said. About 96,000 people entered the country as legal permanent residents from January through March of this year, close to the 106,000 who entered in January through March of 2020.

The State Department now processes about 800,000 applications for non-immigrant visas monthly, including from foreign workers seeking to relocate to the US, according to a spokesperson for the agency. That’s about 80% of the pre-pandemic figure, and processing of immigrant permits is almost back to the prior pace, the spokesperson said.

US policy makers would need to lift the caps on the number of immigrants eligible for entry annually or increase resources to accelerate processing to make up for the workers who would have joined the labor force during the shutdowns. These two shifts will likely have even less political support if Republicans manage to flip Congress in November.

“Normally immigration is about half of our labor force growth,” she said. “It has a tremendous effect on the availability of workers.”