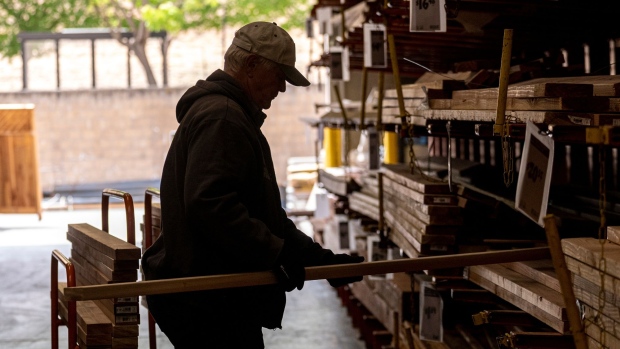 A customer loads 2x4 wood boards onto a cart inside a Home Depot store in Livermore, California, US, on Thursday, May 12, 2022. Home Depot Inc. is scheduled to release earnings figures on May 17. , Bloomberg

(Bloomberg) -- Economists trimmed their US inflation forecasts through the end of next year, likely an encouraging sign for the Federal Reserve as it tries to keep price expectations anchored.

Projections for the year-over-year personal consumption expenditures price index, the Fed’s preferred inflation gauge, were lowered 0.1-0.2 percentage point for each quarter. By the first quarter of 2024, it’s expected to average 2.4%, inching closer to the central bank’s 2% target.

Excluding food and energy prices, the core measure is also seen gradually easing through late 2023, when it’s expected to average 2.7%, according to a Bloomberg survey of economists conducted from Sept. 2 to 7.

Managing inflation expectations is important to the Fed as they can often become a self-fulfilling prophecy. Chair Jerome Powell said Thursday that the “clock is ticking” on ensuring that expectations remain anchored, since the longer prices stay elevated, the greater the risk that people will expect them to stay that way.

The Fed is on an all-out mission to tame the worst inflation in a generation, trying to reel in demand across the economy by raising the cost of borrowing. That’s already taking a toll on the housing market and broader economic growth, and the economists see both weakening further.

Sales of previously owned homes and new construction activity were both marked lower through early 2023. Gross domestic product is now forecast to increase an annualized 1.2% in the fourth quarter of this year and average just 0.9% growth in 2023, each a markdown of 0.2 percentage point from the previous month.

The survey also showed that economists now see a 50% chance of recession over the next 12 months, a slight increase from August. The labor market is seen broadly holding up, with the national unemployment rate expected to peak at 4.3% in the second half of next year, compared to a current reading of 3.7%.