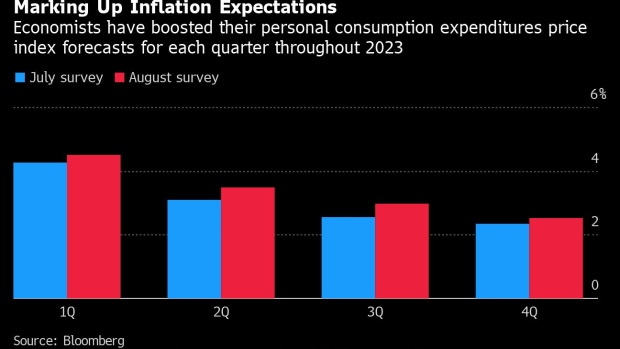 The personal consumption expenditures index, which the Fed uses for its inflation target, is seen averaging an annualized 2.5% at the end of next year, up from 2.3% in July, the latest Bloomberg monthly survey showed.

Perhaps a more troubling sign of the broad-based nature of inflationary pressures, economists project the year-over-year core PCE price gauge, which strips out volatile food and energy costs, to average 2.9% in the fourth quarter of next year, up from last month’s 2.6%.

The higher inflation projections could be a concerning development for the Fed, which has already stepped up the magnitude of its interest-rate hikes to curb price pressures. Should the forecasts come to fruition, that might mean the central bank will have to do even more to achieve its 2% inflation goal.

The 56 economists, who were surveyed from Aug. 5-10, also see the consumer price index clocking in higher throughout next year than they did a month ago. Most of their responses were recorded before the July CPI released on Wednesday and the producer price index on Thursday, both of which moderated on the heels of cheaper energy prices.

Meantime, the probability of a recession over the next 12 months now stands at 49%, up from 47.5% in the July survey, according to 35 of the economists who responded.

Gross domestic product is seen rising an average 1.1% next year, slower than the 1.3% projected last month. GDP growth isn’t expected to top 1.4% in any quarter in 2023.